The Talk invited Matthew Perry on the show and the ladies wanted to know what he thought about Justin Bieber possibly smoking weed in a picture. He took a look at the picture and said nothing seemed weird about Bieber smoking weed but he did find it weird the guy sitting next to him had no face (it was actually blurred out). “His best friend has no face,” Perry said. “No wonder he has to get stoned.” 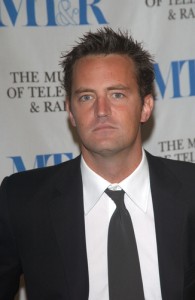 The Talk invited Matthew Perry to discuss meeting his idol Chevy Chase, his father being the Old Spice guy and working on the comedy Go On. (Featureflash / Shutterstock.com)

Perry said he just back from holiday in Miami but he didn’t have a good time. He said he went to South Beach and learned he is either 10 years too old or 30 years too young to be on the that beach.

Anyways, fast forward a number of decades and Perry was playing in a charity tennis tournament with Chevy Chase. It was Perry’s turn to serve the ball to Chase’s teammate. “Now I can serve about 120 miles per hour,” Perry said, “but I can’t aim it at all. So I go to serve the ball to the other guy and I accidentally serve it right into Chevy’s man parts.” And that is how Matthew Perry nearly killed Chevy Chase and ended a charity tennis tournament with one serve.

Matthew Perry and Sara Gilbert apparently went to the same school and Gilbert said she had the biggest crush on Perry when they were in school together. But she wouldn’t have had a chance to go to his house even if Perry had decided to date her. Apparently his father was the Old Spice guy and he wouldn’t bring girls home because his father was so handsome he was scared the girls wouldn’t like him anymore.

The Talk: Sneak Peek Of Go On Episode

The Talk looked at a sneak peek of the new episode of Go On, a comedy starring Matthew Perry. In the sneak peek they watched as Perry’s character listened to a voicemail from Bob Costas and declared he was the one living deity in the world.

After watching the clip, Perry said the scene had actually happened to him. He had received a call from Costas one day and he pitched the idea to the writers of the show about Costas calling his character. The writers wanted to hear the voicemail so Perry called Costas to ask him if he could let them listen to it and he said sure. “It was at that moment I realized I had told Bob Costas I saved his voicemail,” Perry said.

The Talk: Matthew Perry On Go On and The Good Wife

Matthew Perry has a pretty easy time getting on different shows for some reason. He said for Go On he was looking for more of a drama to act in but the script ended up on his desk and he loved it.

As for playing the villainous attorney in The Good Wife, he said he met Julianna Margulies at a Halloween party and told her how much he loved the show. She told the producers what Perry said and they found a role for him on the show.