Luke Wilson has starred in movies and TV for years, and now he portrays a recovering addict in the HBO comedy Enlightened. He visited The Talk to share his thoughts on the show’s upcoming season finale. Plus, he talked about his formative days with business ventures like the Lawn Rangers. 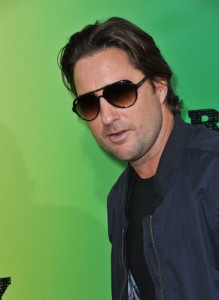 Luke Wilson was on The Talk to discuss the Enlightened season finale, playing opposite Dermot Mulroney, and his youthful business venture, The Lawn Rangers. (Featureflash / Shutterstock.com)

Wilson told the ladies that he grew up in Texas, and he said that he enjoyed his childhood, because he got to play outside and was not so inundated with technology like kids are these days.

Sharon Osbourne said that she thinks parents want their kids to be “little adults” all the time. Wilson said he grew up in Dallas, but felt like he got to enjoy some aspects of a rural childhood.

The Lawn Rangers was Luke Wilson’s business with his brothers. As you can imagine, they had a side business before they were famous mowing lawns.

He also tried to start a window washing company with a friend of his, but they decided to retire after one good day on the job. That is quitting while you are ahead.

When they first moved to Hollywood, Luke Wilson and Owen Wilson were roommates, along with a couple other friends. They had to share space, and in one of their places, they found out there was a gas leak, which could have contributed to their subdued cohabitation.

Wilson plays Levi, the main character’s ex-husband, in Enlightened. He said that he got all the scripts for the season at once, and only read the parts that he was in.

But a wardrobe stylist spoiled one of the revelations that was coming for his character later in the season. He said he took the news that Amy was having an affair pretty hard.

He said he was even more offended to learn that Dermot Mulroney, who once played his brother in a movie, was the man his TV wife was cheating with.

The season finale of Enlightened is Sunday, March 3 2013 on HBO.