Former NFL star Kurt Warner was passed over in the 1994 NFL draft, only to become a Super Bowl-winning quarterback for the St. Louis Rams. He is paying it forward as host of the new dream-making reality series The Moment.

In a clip from The Moment, Warner coached one lucky participant on making the most of his opportunity to have a dream come true.

Warner joined the panel at the table to talk about his big family of seven children. The youngest are seven-year-old twins. 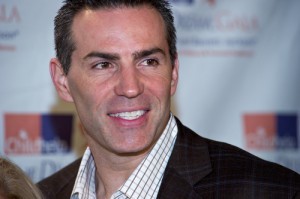 On The Talk, Kurt Warner discussed his USA reality series about second chances, The Moment, and his work through the First Things First Foundation charity. (Christopher Halloran / Shutterstock.com)

On the USA reality series The Moment, Warner gets an opportunity to help other people get a second chance at their dreams, just like what happened to him with his football career.

“These are individuals that, at one point in time, were chasing their dream, and then somehow life got in the way,” he said.

Warner comes into lives and offers people an opportunity to get a crash course training for their ultimate dream job. Everyone from a sailor and a conductor to a NASCAR driver and a diplomatic chef are getting their shots, with a job interview waiting for them at the end of the process.

The Moment can be seen Thursday nights on USA.

After his own NFL dreams were sidelined, Warner found himself stocking shelves at an Iowa grocery store. But he kept his dreams alive.

“I believed that if I was given the opportunity, that I could succeed,” he said. “I wasn’t going to allow somebody else to dictate my future.”

That’s advice I think could encourage a lot of people, no matter what circumstances or “no”s life throws in your path.

As for his Super Bowl rings, Warner admitted that he does not always know where they are, with seven kids running around the house.

Warner and his wife, Brenda, are used to Elijah (and the other kids) calling Kurt a dork. Recently, Elijah had a weekend basketball tournament. As an athlete, he thought he could give his son a memorable pep talk, but instead his son was embarrassed by dad’s advice.

Brenda is also a former Marine corporal, and The Talk hosts speculated that she takes charge around the house. Kurt joked that he can’t imagine her ever taking orders from a man.

Warner and his wife have also started the First Things First Foundation for charity, working to give less fortunate people chances to pursue opportunities. They have a chance to take Make A Wish families to Disney World, for example.

The couple also has an adult son with intellectual disabilities, which has inspired them to build assisted living homes for adults.

“The dreams that we have for all of our children can look the same, even though our child may deal with some of those difficulties,” he said.