Sharon Osbourne took a few moments to set the record straight about the tabloid rumors that she and her husband, rocker Ozzy Osbourne, are splitting up. She said that a lot of what has been in the news is distorted. When you get that famous and when there are so many different conflicting stories floating around, it can be hard to know what is really going on. Is Sharon Osbourne divorcing Ozzy? 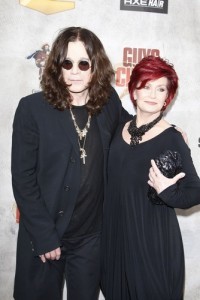 Good thing Sharon was honest and shared her side of the story on TV. It is true, she said, that Ozzy has been using alcohol and prescription drugs over the past year. She did not know about his drug use, but she said she was aware of his drinking, though not the extent of it.

I thought it was interesting how Sharon explained that there is usually a kernel of truth to any tabloid story. Maybe that will make you guess what the true part is of the next tabloid headline you see in a grocery checkout line.

Ozzy has struggled with addiction throughout his life, and there has been a lot of gossip that this latest relapse would lead to divorce. Sharon dispelled that notion, saying the couple is planning to stay together and deal with this challenge as a team.

“Am I happy? No. Am I upset? Yes, I am. I’m devastated right now,” she said, explaining how the disease of addiction hurts all the people around you.

Julie Chen praised Sharon for being open with her audience and fans. She called The Talk a family on and off the screen, and said that they truly appreciate the support of viewers.

Many reached out on social media to check in with Sharon and see how she has been doing, with all this in the news.

The show’s hosts are also open to sharing happy news on the air: Sara Gilbert recently announced her engagement to Linda Perry.