Joseph and Desaree were married for four three years and they have a daughter together. About four years ago the two split up and they both remarried. Joseph went on to marry Amy while Desaree found love with Brant.

Just last February, when their daughter was about 7-years-old, she showed up to school with severe bruising all over her body and the blood vessels around her neck had been broken, clear signs of abuse and attempted strangulation. 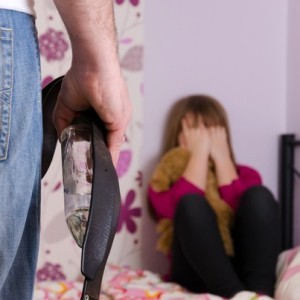 Steve Wilkos June 5 2013 talks with a father who is accused of abusing his child and another man is accused of child abuse after his daughter gets a STD.

But who abused this young girl? Was it her father Joseph or was it mother’s new husband Brant?

While on the show, Brant tried to explain a bruise on the back of the little girl’s head, saying she fell and banged her head, but Desaree told a completely different story about how the bruise happened. For that reason, both Joseph and Desaree are convinced it was Brant who was abusing the little girl. But there is more information to be gathered.

While Steve Wilkos is questioning both the men, he finds out Desaree and Brant have been accusing Joseph of abusing their child because he is a registered sex offender, but he still maintains that he would never and has never placed a hand on his daughter.

Steve Wilkos is also talking with another family who is accusing their son, the daughter’s father, of abusing his daughter. Although the man claims he would never do such a thing to his daughter, she has a STD and the only person she could have contracted it from is her father.

Is he the one who abused her? And who abused Desaree’s daughter? Her new hubby her ex? Steve Wilkos has the lie detector results that will point to who did what an give these little girls some justice.