Michelle Singletary is The Revolution’s financial expert, and her task this week was to get serious with Makeover couple Vivian and Matt. The couple is planning their wedding, but they have a lot of debt to sort out first.

Michelle met with them to get a snapshot of their financial past and future as a couple. She asked them to describe their approaches to handling money. Vivian said she is loose with money, and struggles with budgets. She has five credit cards and owes $20,000 on them. 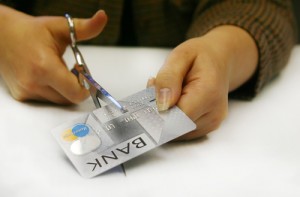 Learn to cut off your debt and take responsibility for your finances.

Meanwhile, Matt is contributing to paying down Vivian’s bills, which is enabling rather than resolving her overspending and debt problems. Michelle said Vivian needs to learn to live within her means and use a budget. She instructed Matt to stop paying Vivian’s bills and told Vivian to quit spending with credit.

The Revolution: Cutting Up Credit Cards

Things got tense when Michelle asked Vivian to cut up her credit card. She was emotional as she held the scissors, but ultimately she took the first step toward getting control of her spending. Vivian called the experience stressful, but said she is ready to be responsible for her finances.

Consolidation Loans Vs Paying Off Debt

Ty Pennington asked Michelle about the mistakes people make when they are dealing with large amounts of credit card debt. She said many people ask about consolidation loans, but Michelle said that is just using debt to pay off other debt.

Michelle said you should just pay off the existing debts, which is not fun at the time but feels great once you accomplish it.

Living Below Your Means

She said that Vivian got a great deal on her wedding dress with Tim Gunn, but ultimately said even that $500 dress was beyond her means. Engaged couples often want big, splashy weddings, but that can mean starting your married life off in debt.

Michelle said you can take a cheap approach to putting together a wedding using the resources of friends and family instead of laying out lots of money and going into debt.

“You’ve got to stop the bleeding. When you’re in a hole, stop digging,” Michelle said. Vivian was using credit as a crutch, and Michelle recommended that she start spending cash only, so she can really see what her spending and income look like.

Michelle also suggested that people in deep debt learn to live below their means while they are getting debt under control. You can take on a roommate, live with your parents, sell your car or get rid of unwanted possessions to find extra money and get out of debt.

Since their intervention, Michelle said Vivian has been saving money and even paid some back taxes she owed. “It’s wonderful that she can do it, and if people follow that same path, they can do it at home,” she said.

Michelle Singletary: Your Money And Your Man Review