Tim Gunn called himself Jenny’s style therapist. He helped her choose a goal outfit from his magical Macy’s closet that she will wear in her big reveal on Friday. That’s four months of real time for Jenny, but through the magic of TV, it’s four days for us.

As a former Southern California beach babe, Jenny wants to show more skin as she gets more comfortable with her body. She used to be exposed all the time, in bathing suits on the beach and in her former occupation as a beach lifeguard. Tim said lots of women reflect on the skin they used to show and want to be sexy but appropriate as they get older. 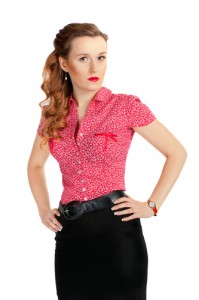 Tim Gunn said you can show some skin without being scandalous.

V necklines or plunging necklines can be attractive alternatives for baring skin without being obscene. Another option is sleeveless tops, which show off the arms but are not too revealing otherwise. Jenny hasn’t gone sleeveless in years, and wants to get back into more stylish attire.

To do that, she needs to be more comfortable about exposing her body once again. Self confidence plays a big part in fashion as well as fitness, and the two seem to fuel each other. Success and progress in one area can often carry over to the other.

Tim asked Jenny to envision who she will be at the end of her Revolution. He recommended a Pencil Skirt, which is slimming and shape fitting.

He also suggested Blue or Green tops, because Jenny has a fair complexion. Read about The Right Shade Of Red For Your Complexion.

Drop Necklines will frame your face, which can change your look. Tim recommended High Boots to complete Jenny’s goal outfit, jazzing up the classic pencil skirt.

Jenny seemed intimidated by the outfit, but she’ll probably be proudly flaunting the outfit when Friday’s show rolls around. She has already lost 22 pounds in her first month of diet and exercise, which is almost twice as much as most of the show’s featured women did in their first months. I’m curious to see if she can keep up such a dramatic weight loss pace.