Financial expert Michelle Singletary has written three books about personal finance, and she gave advice to The Revolution audience. She said that your close friends and family members could be the people who need the most financial guidance in your life.

She introduced a man whose poor financial decisionmaking almost brought an end to his marriage. It was her younger brother, Michael Singletary. 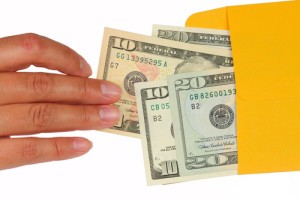 You can use envelopes of cash to teach yourself how to stick to a budget.

Michael shared what caused him to turn to his sister. He and his wife did not have a financial plan. They lived paycheck to paycheck and argued about paying bills. Michelle gave Michael and his wife the tools to get control of their finances.

Michelle’s first tip is to stop hiding your bills. You can’t take care of your bills unless you know what they are.

Be Agressive About Budget Cuts

Michael cut down cable TV and phone plans to the bare minimum to get back on track.

Michelle put Michael on an allowance to teach him to save for an emergency fund.

Use Cash To Budget

Michael and his wife used envelopes to budget their money in cash. They used categories like Groceries, Gas, Entertainment, and Personal Allowance to divide their money. When the envelope was empty, he had to stop shopping in that category until the next payday.

This method can teach you in a tangible way about budgeting. It’s a lot easier to swipe your card and forget about it until later, but having cash in hand (or not) makes you think actively about your spending.

The Revolution: College Money For Your Children

Michael got emotional about this topic, admitting that he and his wife failed to save for their daughter’s college education. A loan from her sister helped him realize the importance of these financial goals. Eventually, Michael’s daughter graduated with a Master’s Degree and no student loan debt.

Managing money can be challenging for many of us, but the only way to take control of your finances is to stop avoiding them and face the situation. You can learn to manage your money so you can stop stressing and start saving.