After chatting about Carnie Wilson’s 2nd Weight Loss Surgery, The Doctors got the medical perspective on her Band Over Bypass procedure from her laparoscopic bariatric surgeon, Dr. Helmuth Billy.

“In Carnie’s situation, she’d already had an operation, and she’d been very successful with it,” Dr. Billy said. “And some of these gastric bypasses, after 10 years, they’re not functioning the same way they did before, for lots of reasons.” 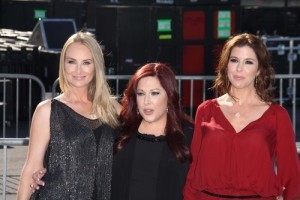 He explained that her stomach had basically become a funnel, and repeating the Gastric Bypass would not have been the safest option. Instead, they elected to put a ring around her stomach, which is adjustable.

Dr. Andrew Ordon demonstrated how the Lap Band actually works. Doctors can add saline fluid to a ring inside the band, which constricts the ring to create a smaller stomach opening, preventing a patient from ingesting too much food.

Almost three months after her most recent surgery, Carnie Wilson said she has lost 32 pounds. “I like the pace that I’m going at,” she said, noting that her current weight loss of one to two pounds each week feels healthy, and she hasn’t been starving between meals.

Carnie said that Dr. Billy worked with her to help her take a look at how she thinks about the food and nutrients she’s putting in her body throughout the day. Her focus is on fixing the inside and outside at the same time.

The Doctors: 3 Tasks To Lose Weight with Carnie Wilson

“It doesn’t work to say ‘go out and eat properly,’” Dr. Billy said. “You really have to make it simple, and you can’t give people 15 tasks to work at once.”

For Carnie, Dr. Billy broke things down with three simple steps she can take to improve her chances for weight loss success.

Dr. Lisa Masterson said she loved how Carnie Wilson is taking charge of her health, even after her setbacks with weight in recent years. Carnie said that the calories, lack of exercise, and many other factors. She didn’t want to make excuses, and instead she’s focusing on changing her behavior and habits.

“I believe that we all need a support system. Everybody needs support,” she said. “The minute you isolate and feel alone about something, you’re going in the wrong direction.”

Carnie encouraged people to ask for help when they need it, and she’s happy to share her story if it can help others.

Carnie Wilson and her bandmates are starring in the new reality series Wilson Phillips: Still Holding On, Sunday nights on TV Guide Network. That’s the channel that used to be famous for scrolling listings.