JoMarie Payton may not think so, but she hasn’t aged a day since acting on Family Matters. Payton played the mother of the Winslow family, who brought lessons to their audience every week. She said she gets stopped by people and they tell her that their children are now watching Family Matters. She said that Family Matters has always been on the air thanks to the dedicated fan base. 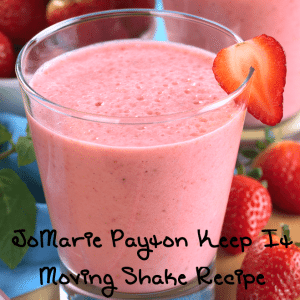 JoMarie Payton, the mom from Family Matters, brought her secrets to a healthy, weight loss shake that keeps things moving and a secret for menopause.

“We have a responsibility as artists to give our audience something good as well as entertaining,” she said.

Payton said that she learned a lot from parenting the kids on her television series. Eddie, played by Darius McCrary, was her “heart.” He played older than he really was and she was very protective of him. She told the producers and her peers on the show that they wouldn’t be smoking and eating during the table readings. She wanted to set a good example for the kids because then they would learn and respect the craft. Payton didn’t want one of the younger actors to start taking on the older actors’ bad habits.

Darius still calls JoMarie Payton “momma” and she calls him “baby.” To this day, she’ll call him up and reprimand him if she sees him around town speeding.

JoMarie Payton had her stomach stapled about 20 years ago. She said she was never a heavy kid growing up, but after pueberty she started changing. She only had a period every six months and her hormones were very out of synch. Her mother and she started a shake that will keep things moving.

Here’s what you need:

Here’s how you do it:

Throw all of these ingredients in a blender and whip up a healthy shake that will keep things moving. You can use strawberries, blue berries, pineapple, and any fruit that tickles your taste buds.

Here’s what you need:

Here’s how you do it:

Get the sweet potatoes as soft as you can get them. Blend everything together for a shake that will keep the hot flashes and menopause symptoms at bay.