Today’s show was supposed to be Unscripted, and it did seem spontaneous, but that lightheartedness didn’t do much for The Doctors, who often ran out of time to explain what they were trying to discuss. Also, for some viewers, the show was marred by technical difficulties. In case you missed anything, the links below will take you to today’s highlights. 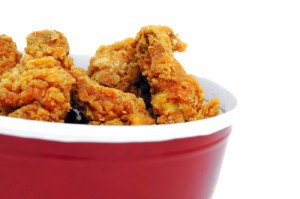 Maybe you’ve noticed that vodka makers are expanding their offerings into food flavors. I’d heard of Bacon Vodka, but did you know there is now Salmon Vodka? Also, kissing may not spread as many germs as you think. Plus, diaper changing tips.

The Doctors: Salmon Infused Vodka & How To Change Diapers

Fried Chicken can be a sinful treat, but The Doctors say it’s OK to indulge now and then. Learn about the health benefits of eating live octopus and what Dr. Lisa Masterson has to say to the World’s Fastest Talking Woman about Getting Your Period After Menopause.

Does birth weight affect your ability to give birth vaginally? It depends, and your doctor may be the best judge. Also, a revolting cyst removal procedure that was twice as gross to watch as it is to read about.

Everyone wants to look younger, but how far are you willing to go? Would you rub Earthworm Poop on your face? It’s a new beauty treatment. Have you noticed dark snot in the morning when you blow your nose? Find out what might be causing it.

The Doctors: How To Use A Fire Extinguisher & PASS Method

Learn about the types of fire extinguishers and what they are used for. Also, the word PASS can help you learn how to use a fire extinguisher in an emergency. And how you can use camping equipment to temporarily set a broken limb.

The Doctors: How To Use A Fire Extinguisher With The PASS Method

Learning the Heimlich Maneuver is easy, and you never know when it could make you a lifesaver. Also, an Arm Wrestling Grandmother takes on Dr. Jim Sears.

The Drs: How To Do The Heimlich Maneuver & Arm Wrestling Grandma