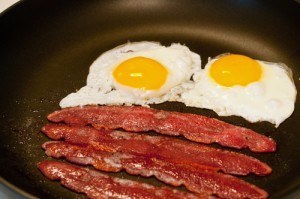 Teenagers have never been known for their good judgement, but this latest trend on YouTube and suburban streets is a cause for alarm among The Doctors and parents. It’s called Couch Surfing, and the idea is that teens tie old furniture to the back of cars or trucks and ride down the street on a couch being dragged behind a vehicle. (First of all, there are obviously no seatbelts in a used couch, among many other dangers of this behavior.) The Doctors also talked about Iowa’s Bacon Apocalypse Now festival and healthier alternatives to favorite bacon products.

It’s almost like something out of the TV series Lost. A family vacation turned treacherous when their plane crashed into the ocean. The Doctors met the family who amazingly survived this harrowing experience and learned how they managed to make it out alive. They also discussed survival tips for others, in case you ever find yourself stranded and aren’t sure whether help is on the way.

Tony Ciaglia was an average 15-year-old, until the day he suffered a serious, life-altering brain injury. His world changed overnight, and even his personality vanished. He was a stranger to his friends, who abandoned him, but his family stuck with him. As an adult, he channelled his dark emotions into an odd hobby: corresponding with serial killers, who find Tony easy to open up with. The Serial Killer Whisperer shared his story with The Doctors and talked about how he is assisting authorities with cold cases.

Do you struggle to cover up your brown spots as you get older? The Doctors talked about ways you can treat these common beauty problems, including the Ulthera Sagging Skin Treatment, and products like MyChelle Fruit Enzyme Mist or Fruit Fiesta Peel. They also taught an easy wall squat exercise you can do during the commercial breaks of your favorite daytime talk shows.

Vision problems affect millions of Americans, but in many cases corrective LASIK surgery is not an option. The Doctors met one woman in this situation, who was legally blind without contacts or glasses. Learn about the Laser Contact Lens Implant procedure she received and find out who could be a candidate for this innovative new option.

Degenerative Disc Disease is another reason not to look forward to the effects of aging. Though a certain amount of degeneration is a part of getting older, sometimes these cases become even more advanced. Until recently, there has been little in the way of effective treatment for this condition, but The Doctors profiled the new Stem Cell Study that could offer a ray of hope. Also, Dr Travis Stork extolled the emergency uses for women’s pantyhose.