Do you ever feel stressed or burnt out? According to a new study, 40% of Americans are so stressed, they can’t sleep at night. It’s about time that we start talking about how stress affects our lives. To learn more about handling stress through even the most difficult times, The Doctors welcomed Leeza Gibbons.

Leeza is an entertainment journalist and host of such shows as Entertainment Tonight and her own talk show, Leeza. Leeza has shared a very personal struggle with the world by exposing her grandmother’s, and then her mother’s diagnosis with Alzheimer’s Disease. In 2002, Leeza founded the Leeza Gibbons Memory Foundation to offer support for patients, families and caregivers affected by Alzheimer’s. 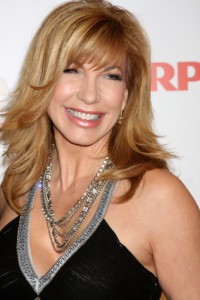 Take 2: Your Guide to Creating Happy Endings and New Beginnings

Leeza has also written a new book about surviving stress and improving your life. In Take 2: Your Guide to Creating Happy Endings and New Beginnings, Leeza’s goal is to inspire courage and hope.

On The Doctors, Leeza explained that her book isn’t really about self-help, but about “life support.” It teaches people how to “set the reset button” on their lives. Leeza believes strongly that everyone has the power to change their life at any time.

When Leeza’s grandmother died of Alzheimer’s, she knew that she had to do something. “You feel so helpless,” she said of the people who care for their sick loved ones. Soon, her mother was diagnosed with the disease.

Dr. Andrew Ordon understands exactly what Leeza is going through, because his mother was also diagnosed with Alzheimer’s. “There is movement towards a cure,” Dr. Travis Stork explained. However, in the meantime, there are 65 million caregivers dealing with the stress and loneliness of Alzheimer’s every single day. Understandably, 30-60% of these people suffer from depression.

Leeza shared some of the helpful stress reducers that she discuses in her book. Sometimes, Leeza relies on releasing a primal scream in order to relieve stress. Leeza invited audience members to shake their heads, hands and scream at the tops of their lungs on the count of three.

Leeza also believes strongly in “The Three S’s:” Sleep, Share and Speak Out. Rest is extremely important, but so is sharing your burden and story and speaking out when you need to.