The Doctors revealed incredible medical breakthroughs, which is why we met Justin and Clare; an ordinary couple with an extraordinary story about their unborn child.

Justin and Clare had always wanted a big family, and after two healthy children, Clare became pregnant with a third. Her pregnancy felt very normal, but it was at their 19-week sonogram that they received very bad news. Their doctor told them that their unborn child had Spina Bifida, which had resulted in clubbed feet and a herniation of his brain. Unfortunately, with Spina Bifida, the longer the baby stays in the womb and is exposed to the amniotic fluid, the more damage is caused. 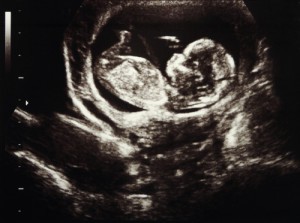 Kellen's Spina Bifida was treated in-utero with cutting-edge surgery explained on The Doctors.

However, Justin and Clare were given a glimmer of hope when they found out that the option to try in-utero fetal surgery was available. By closing the spine while the baby is still developing, fetal surgery gives the child a better chance for a more normal development.

Of course, the surgery wasn’t without its risks; Clare was told that a worst-case scenario involved both her death and the death of the baby. Thankfully, the story has a happy ending. Clare gave birth to a baby boy named Kellen just six weeks ago, and she, her husband, and her doctor, Dr Darrell Cass, joined The Doctors.

Dr Masterson explained that Spina Bifida develops in the first 2-3 weeks after pregnancy. It occurs when there is a defect in the neural tube, which is a part of the central nervous system. If the nerves become exposed, a sac in the lower back can form, and the brain swells. Spina Bifida causes defects that can affect a child for his or her entire life.

Spina Bifida is usually treated surgically after birth, so that’s why the in-utero surgery is so cutting edge.

The Doctors: In Utero Fetal Surgery for Spina Bifida

Dr Cass explained how the surgery was performed on Clare and Kellen. First, Clare’s abdomen was opened up to expose the uterus. Kellen’s back was pulled into view, and the neurosurgeons spotted the sac of nerves on his lower back. That sac was excised by the surgeons, and they were then able to close the skin over the damaged spinal elements. Lastly, the uterus had to be re-closed, which was very tricky because the pregnancy still had to continue.

Now, Clare is doing fine after undergoing the surgery and then a delivery. There haven’t been any real complications, except for the fact that Kellen has clubbed feet. However, Kellen has been working with orthopedic surgeons who believe that he will be able to walk.

We followed Justin and Clare into a meeting with pediatric orthopedic surgeon Dr David Antekeier to learn more about Kellen’s clubbed feet and possible treatments. Dr Antkeier explained that the reason Kellen has clubbed feet is because his nerves didn’t develop properly in utero. Kellen will undergo 5-6 sets of castings in attempt to reverse the clubbed feet.

Every 7-10 days, Justin and Clare get new casts for Kellen’s feet. Luckily, Dr Antekeier is very optimistic about Kellen’s chances for walking some day. Because of Justin and Clare’s extraordinary story, Diapers.com gave the family one year of free diapers, which is sure to come in handy!