The Doctors talked to Martha, who reached out because of her droopy eyelids. Over the past few years, she’s noticed a significant change in her vision. Her eyelids are drooping so much that they’re causing blurry vision. She said it feels like a shadow over her eyes. It causes her tunnel vision and impact her ability to drive, walk up the stairs, and even do something as simple as read or look at her phone. It’s gotten so bad that last month, she started taping up her eyelids.

The Doctors: What Is Eyelid Ptosis? 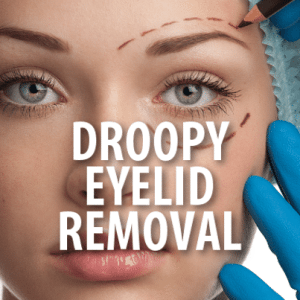 The Doctors talked to Martha, who underwent a procedure to remove her droopy eyelids, or Eyelid Ptosis, which was causing her serious vision problems.

After seeing her eye doctor, Martha was referred to Dr. Christopher Zoumalan, who said that Martha is suffering from a condition called Eyelid Ptosis. It’s extra skin that droops over her eyelids and causes decreased function in the eye. She’s having difficulty seeing in her upper visual fields. So Dr. Zoumalan’s goal was to fix the problem while simultaneously trying to make her appear more rested.

Dr. Zoumalan performed a procedure in the upper eyelid. Mostly, he worked in the muscle responsible for eyelids to close. He was able to hide his sutures in the nature wrinkles of Martha’s face. I’ve seen a lot of these procedures on The Doctors and I have to say, this one seemed extremely efficient. Dr. Zoumalan got in and got out. It seemed like a pretty simple procedure.

Martha looked younger and a lot better following the procedure. Dr. Andrew Ordon said he was looking for her sutures, but he couldn’t see them. That’s high praise coming from a board-certified plastic surgeon, who is trained in working on people’s faces.

Dr. Ordon said that ptosis can cause extreme drooping, where the eyelid begins to lose the ability to raise fully. That wasn’t the case for Martha. Martha just had extra skin that was blocking part of her eye.

Dr. Zoumalan demonstrated the procedure on a model, marking the place for the cut and tearing away the bad skin. Of course, the model he was using was made out of plastic or rubber, which did not look good after cutting. Martha looked much better.