The Doctors issued a warning that you may want to think twice before considering laser hair removal. A California woman went in for a routine laser hair removal procedure and ended up with second degree burns all over her legs.

Very clearly, that is not supposed to happen. Dermatologist Dr. Sandra Lee joined The Doctors to explain what happened and how often it actually occurs.

Dr. Sandra Lee said this is happening more and more and said she thinks that what is happening is that there are medical spas going up all over the country and non-physician providers are conducting the procedure. 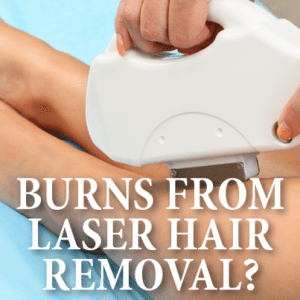 Dr. Drew Ordon explained that while the technology has improved for laser hair removal, the problem starts when you have people doing it that are not properly trained. He said they’re not doing it on the right patients.

Dr. Sandra Lee said that people think you just push a button and are able to treat someone.

Dr. Travis Stork further explained that it’s not about whether you’re a doctor or not, because there are physicians out there who don’t know how to use the machines.  Dr. Ordon said he doesn’t think a week goes by where he doesn’t see a burn related to laser care. Dr. Sandra Lee said that it’s happening often and it’s alarming and scary for someone to go through that.

She said the burns that people get from these incidents can take a long time to go away. Some of the burns can lead to scars that are permanent. One of Dr. Sandra Lee’s patients was on the show to talk about her experience being burned during laser hair treatment.

She said she’s still healing and explained that she went in for a few treatments and never had a problem, but when she went to her latest session, there was a new practitioner with the company who was trying out a new machine. As she got started, she realized it was hurting a lot more than during previous sessions. She asked the physician to stop and slow down, and she ended up turning down the settings, making it much more tolerable. But by the time she got back to her car she knew something had gone wrong.

The Doctors: Is Laser Hair Removal For You?

Dr. Sandra Lee said to trust your instinct, especially if you’ve had a treatment before. If it’s really painful, speak up and say something. She encouraged people to ask a lot of questions and ask the physician about their experience.

She said you should also be aware of tanning before going to laser hair treatments. Dr. Lee explained that the laser doesn’t know it’s treating hair, it’s treating color. So the best person to undergo the treatment is someone who is pale with really dark hair. If your skin is the same color as your hair, that’s when you can accidentally treat your skin, resulting in a burn.