After a woman tried a product that claimed to help reduce the appearance of under-eye bags, she decided to go to Dr Andrew Ordon in hopes of a more permanent solution. Dr Ordon noticed three fat pockets underneath each of the women’s eyes, which meant she needed to undergo scar-less eyelid surgery to remove the fat pockets. She offered to do the surgery for her. To protect her eyes during surgery, he first had to put in eye shields, and then anesthetized her eye lids before going inside the eye to remove the fat. He didn’t remove all the fat because he didn’t want to leave her looking hollow, but he certainly took out a good amount to leave her without bags. Her before and after was truly remarkable even just one week after surgery!

Would you ever consider undergoing surgery to remove your severe under-eye bags?

The Doctors: The Truth About Teeth Whitening 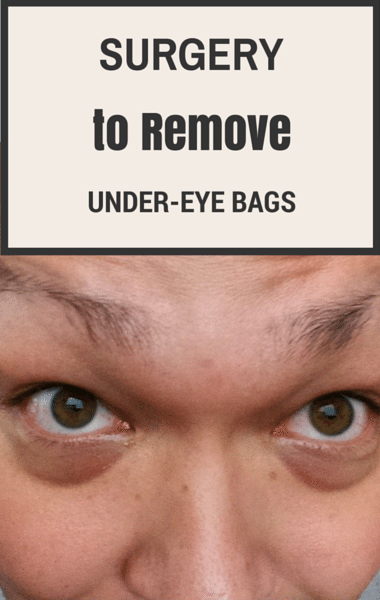 The Doctors followed one woman as she underwent surgery to remove the fat causing under-eye bags. (paulidin / Flickr)

There’s a good chance you’ve seen pictures of celebrities on Instagram holding a blue light mouthpiece, claiming it’s responsible for their pearly-white teeth. Dr Sako Karakozian explained that the light is usually coupled with some kind of peroxide gel or pen. The peroxide is what actually does the whitening. The light is debatable, but the heat coming from the light could dry your teeth quicker making them look whiter. But when your teeth are dry, they’re more susceptible to discoloration or damage. If you have veneers, it’s important to know that those won’t whiten. Always talk to your dentist before trying any sort of treatment.

Coffee is one of the biggest causes of teeth stains, so rinse your mouth out with water right after you have a cup to help.

Looking hungover isn’t exactly ideal for anyone, which is why The Doctors wanted to put a product to the test that claims to erase the signs of a long night of drinking in just minutes. The women applied the masks and then removed them a short while later to see if they made their eyes and skin look refreshed. Nothing can improve the appearance of your skin like proper hydration and a good amount of sleep, but how did the mask hold up? The women liked the way their skin felt, but Dr Ordon explained that there are plenty of products available that can moisturize the skin and help tighten things up to reduce the appearance of bags.

The Doctors: How Heavy Is Your Purse

Next, The Doctors reported that the average woman’s purse weighs six pounds, which is like carrying a brick on your shoulder. That can lead to back and shoulder pain! One producer’s bag weighed 11 pounds, while another’s weighed 12 pounds! That’s a lot of stuff!

Stuff was the word of the day and you can use the word “Stuff” on The Doctors’ website to win a Mighty Purse clutch.

For The Doctors’ News in 2:00, they shared that Amy Schumer was included in “Glamour” magazine’s plus-size bonus issue. She tweeted “Glamou mag put me in their plus size only issue without asking or letting me know and it doesn’t feel right to me. Young girls seeing my body type thinking that is plus size? What are your thoughts? Mine are not cool Glamour not Glamourous.”

A Glamour rep said it wasn’t their intention to offend Schumer in the issue.

The DEA is actively pursuing a drug-smuggling operation behind a pill being sold on the streets as an opioid but containing lethal amounts of a painkiller. In Northern California, ten people have died in just 12 days. A toxicologist at UC Davis Medical Center believes there is a sophisticated operation making the drug that is “probably 100 times more potent than morphine.”

The DEA believes the drug is being made in China, distributed in Mexico, and making its way up the southwest border, into the United States.

The Doctors: Force For Change Campaign

Star Wars: Force for Change has launched a 4-week campaign where fan donations to four designated charities will be matched up to $1 million. Force for Change was inspired by fans and aims to inspire people to make a positive impact on the world around them.

To stop your feet from hurting while wearing high heels, try the Doctors’ prescription of the day. Use cotton balls or Scotch tape to tape your third and fourth toes together, counting from the big toes. It can reportedly help to prevent a nerve from rubbing and to stabilize the bones.