The Doctors: Living With Cleft Palate

The Doctors explained that it can be devastating to see a child with a cleft palate deformity, but what about an adult? A woman named Alesha shared that she is 35 years old and was born with a Bilateral Cleft Lip Cleft Palate. She said most of the time her condition is fixed while the patient is still a baby, but the surgery would have required a several-months stay in the hospital with her mom, and she didn’t want to deal with it. 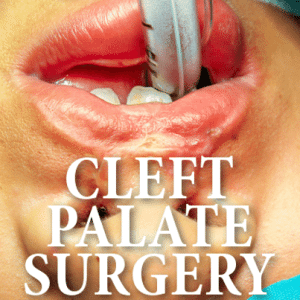 The Doctors talked to a woman who has been living with a cleft palate and finally got her the answer she’s been looking for. (Chaikom / Shutterstock.com)

Alesha shared that she was always told it was a good thing she was smart because she wasn’t pretty. She grew up being bullied and teased, but then got married when she was 22 years old. She said at first her Cleft Palate wasn’t an issue, because her husband loved her and made her feel loved and safe. But her husband had renal failure and had complications due to juvenile diabetes, and eventually passed away.

Alesha said when her husband passed away, she was numb for a while, and said there is no one she will ever love more than him. She recently tried to start dating again but the first thing she noticed in the profiles she looked at were, “Have a great smile. No messed up teeth.” She didn’t get very many responses and she was even fired from many jobs due to complications from her birth defect.

She’s a graphic designer and she can’t get a job because when she goes in for a job, they see how she looks and automatically dismiss her. Alesha has also been on constant antibiotics for chronic sinus and ear infections which has damaged the enamel of her teeth. One by one, her teeth started to rot, and now she only has two teeth. She has to be careful what she eats and how she eats it, saying she even has to push water through her nose to keep from getting an infection.

Alesha just wants to be able to smile like everyone else but said she tries to not let herself hope,”because hope can be very dangerous.” She said if her defect was fixed, she would finally be able to be her.

The Doctors set her up for an appointment at the Southern Nevada Cleft Palate and Craniofacial Clinic, and Dr. John Menezes explained that they needed to look at her nose, which would require a plastic surgeon, and they also need to get the dentist and oral surgeon involved as well. An audiologist and speech language pathologist would be involved in her case as well. On top of that, a specialist with ear, nose and throat surgery would take a look at Alesha, as well as an optometrist.

Dr. Menezes explained that Alesha is a more complex patient because she had a previous surgery, so she has scar tissue on top of her cleft palate. The entire team met to talk about Alesha’s case and they said she need to have oral reconstructive surgery. Dr. Glen Roberson, the orthodontist said they needed a 3D image to see where the bone is to put in implants. They shared that the few teeth Alesha has are useless in terms of reconstruction so they have to go. The entire team acknowledged that it was a very tough case.

Alesha joined The Doctors on the show and Dr. Andrew Ordon shared some great news with her. The medical professionals at the Cleft Palate Center are going to fix her cleft palate and and give her the smile she deserves. The entire procedure will be done for free. Alesha said she’s been given a huge amount of hope.