The Doctors: What Is A Keloid Scar?

Jazmine got her eyes pierced about 10 years ago and it caused a growth called a keloid scar behind her ear that she’s gotten removed four times. Each time, it’s come back bigger. Jazmine said she really wanted it gone for good. Dermatologist Dr. Sandra Lee had the answer for Jazmine. Dr. Sandra Lee said that a keloid scar is triggered by trauma, which means that excising the keloid is not the answer, because the more you try to remove it, the stronger it gets. 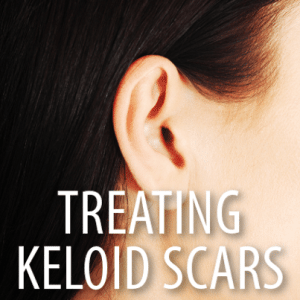 What are Keloids? Find out what happens with these painful growths and why they leave a scar behind that can be hard to get rid of.

The Doctors: Post-Treatment For Keloids

Normally, after a surgeon removes a keloid, they put some steroids on the scar area to prevent it from growing back. Dr. Sandra Lee said that she would put steroids in this case, but the biggest indicator of regrowth comes from the patient. She said the patient would know first if the keloid was coming back. Dr. Sandra Lee said that 90 percent of people only need one treatment of this. However, only keloids shaped like a grape or ball are optimal for the procedure.

Check out the video of the procedure below, where you can actually see the keloid start to freeze off. If you were thinking about eating an apple while watching the video like I did, I would advise you not to do so. It’s a pretty graphic video. Even Dr. Jennifer Ashton looked grossed out by this procedure and Dr. Jennifer Berman seemed absolutely perplexed by it. You also have to feel bad for Jazmine, who got the chance to appear on national television, but did so with a big frozen needle through the growth on her ear.