One of the things that sets The Doctors apart is that they always focus on medical advances and information that can help you make informed decisions or learn something new. They occasionally have celebrity guests, but when they do it is usually in service to the health topic at hand.

There’s no denying that it can be fun to get a glimpse into the personal lives of celebrities. That’s why we have tabloids, entertainment news, and gossip blogs. But coming up on the next episode of The Doctors, we’ll learn what some iconic stars are doing to stay healthy and at the top of their game. 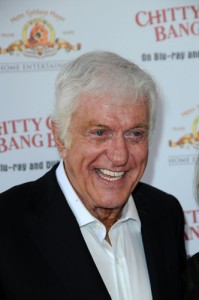 In his 80s, Dick Van Dyke has married a woman half his age. Learn his longevity secrets. (Image Credit: s_bukley / Shutterstock.com)

The all new Thursday May 3 2012 episode will feature an all star guest list to share health and wellness secrets that work for the stars and may work for you to. Check out the who’s who of guests coming to The Doctors and set your DVR now.

He has spent decades as a television icon. Now, at age 86, Dick Van Dyke is a living legend. Coming up on The Doctors, he will share his secrets to living a long, happy, and healthy life. Maybe he can even open up about the secret of his success.

From sitcoms and dramas and movies to TV shows, Dick Van Dyke has done it all. Now he’s talking about his greatest role: grandfather, and in his 80s, new husband. Find out the secret to his long and storied success.

Plus, Jewel became a pop sensation in the 1990s with her brooding country ballads. Now she’s using her musical career to help others. Find out how she is sharing her talent to benefit starving children in our own backyards. That’s all coming up on the May 3 2012 edition of The Doctors, so set your DVR now.

For even more celebrity goodness, The Doctors are asking TV actress Tiffani Theissen to share the beauty secrets she’s learned over the years in Hollywood. And fitness entrepreneur Billy Blanks will be on hand to share his latest training tips. That’s all new on the next episode of The Doctors.