While most nine-year-old boys would be busy playing video games, Nikolas Toocheck is outside training for a marathon. At the age of six, Toocheck completed his first race, which was two miles long, and since then he has completed two marathons. He said he runs because he loves it but he also runs to raise money for Operation Warmth, a charity founded by his grandfather that provides winter coats to children in need. Even though he may be running for a good cause, is it safe for such a young child to run such long distances? 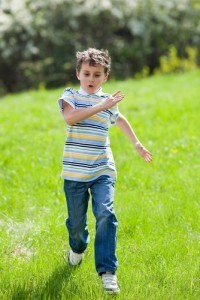 The Doctors looked at the controversy surrounding Nicholas Toocheck, a nine-year-old marathon runner who they thought might need to stop running so much.

Although many experts are worried about the effect of running on his still growing body, Toocheck’s mother said she is not worried about her son. She said they took him to a physician who told her Nikolas could run in marathons and she could be sure he was going to be okay.

Dr. Jim Sears did not agree with the physician though. He said running can be very hard on the body, pointing out that the longest race any high school is only allowed to run is three miles long. He also noticed Toocheck running on asphalt, the worst type of ground to run on for long distances. Dr. Travis Stork was also worried about Toocheck’s gait. It looked a little strange like his legs were trying to go in opposite directions but were pulled together by invisible magnets in the boy’s knees.

The one thing Dr. Stork was most worried about was injury. He said the running may already be causing damage to his growth plates but if he gets injured, the risk of him injuring his growth plate is very high. Dr. Ordon pointed out that enough injuries can stop a bone from growing.

The Doctors also read a statement from The International Marathon Medical Directors Association which stated “Marathon running should be reserved only for those individuals who have reached their eighteenth birthday. Children are not small adults. Their anatomy and physiology are developing and not fully mature.”

What do you think about children running marathons? Could it be bad for their health? Would you let your child train for and run in marathons?