The Drs: What Honey Boo-Boo Eats

Honey Boo-Boo originally made headlines as a pageant contestant in Toddlers and Tiaras and she’s been in and out of the headlines ever since. The Doctors recently became concerned about her diet after realizing just how unhealthy she and her family truly were.

Honey Boo-Boo shared that her favorite breakfast is a breakfast bowl, which is a microwavable plastic bowl that contains potato, bacon, eggs, cheese, and ham. Mama June said that her daughter is not overweight because she eats all the time, it’s because she has respiratory issues and is on a lot of steroids, which is what keeps her thick. She said her pediatrician is not that concerned either because he thinks it’s the steroids.

Mama June said that one of the healthiest meals she makes is tuna noodle casserole, which is made with tuna, cream of chicken soup, eggs, and noodles. She said staples for them would be macaroni and cheese or corn, and they don’t eat salads all that often. 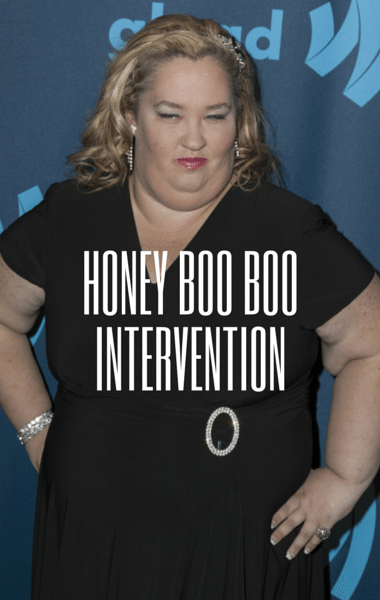 The Doctors welcomed Mama June to the show, saying that they wanted to address her daughter’s health. She said she is worried about her daughter’s health, but mentioned her own health issues. She said that although Honey Boo-Boo mentioned that she loves fried food, they don’t own a deep fryer and they eat a lot of baked foods. Dr Jennifer Ashton said Honey Boo-Boo is 4’6″ and 125 pounds at 9 years old, which means she’s obese.

Mama June once again blamed her asthma and respiratory issues, saying that she’ll grow out of it just like her older daughter did. Dr Travis Stork said there’s no doubt that they have to address Honey Boo-Boo’s asthma, but what he was hearing was a lot of excuses. He explained that asthma is the inflammation of the airways, and we’re learning more and more about how the food we eat and our environment can increase inflammation in our bodies.

Dr Stork said part of Honey Boo-Boo’s treatment is going to be to try to minimize some of her steroids. He said the common culprit is what you’re eating and when he looked in their fridge, he didn’t see a single thing that would improve her weight or decrease inflammation in her body. He said as a mom, she had to take some responsibility.

Mama June said she knows she’s not the perfect parent. Dr Stork pointed out that it’s not just about not eating fried food, saying that the breakfast bowl Alana (Honey Boo-Boo’s real name) eats has 830 mg of sodium, which is over half the daily allowance for an adult. They’re also eating sugar-loaded yogurt, which can add calories and cause the inflammation to be worse.

Dr Jennifer Ashton said that obese 9-year-olds become obese 15-year-olds, and it goes on and on.

The Drs: Being A Good Role Model

Dr Ashton told Mama June that the most important role model for a young girl is her mother. Dr Stork then shared that every fruit drink that she gives Alana has as much sugar as four chocolate glazed donuts. He said what it comes down to is that she has a beautiful 9-year-old daughter with severe medical problems, and there’s all kinds of stuff in their house that isn’t helping her. He said it all starts with Mama June and she has to get over making excuses and commit.

Mama June said they had a nutritionist come in when they did the show, and all they did was hand them a piece of paper and tell them what to do, rather than show them.

The Doctors also welcomed Dr Danica Schulte to the show, who is a pediatric immunologist, to talk about how to get Alana’s asthma under control. Dr Schulte said Alana’s asthma is “so out of control it’s not even funny.” Because she has asthma, her activity level is effected. She said there are studies that show reducing her weight can impact her asthma much more than the medication can.

There are basically two things they needed to do: get her asthma under control so she doesn’t need oral steroid bursts every month and reduce inflammation through a better diet. Dr Schulte said they did Alana’s breathing tests and her lungs look perfect when she’s not having an attack, so her total lung volume hasn’t been affected yet. She said now’s the time to jump on it.

It all comes back to what she’s eating, which means Mama June has to take control of the situation at home, since Alana’s cholesterol levels are elevated. Dr Stork said he didn’t feel that Mama June was truly connected, but she argued that she’s scared for her daughter. She said they’ve changed a lot before so she knows they can, it’s just that someone needs to show them how.

The Doctors made it very clear that Alana is not obese because of the medication, it’s about her diet. Dr Stork shared that children who had one sugar-sweetened beverage per day increased their risk of obesity by 60%. Find out what other advice The Doctors gave Mama June and Honey Boo-Boo.