The Doctors know food can be everything to your health, so they invited Denise Austin on the show to give everyone some helpful tips about eating healthy in different restaurants.

If you have ever seen Denise Austin on the show, you know she is a ball of energy. And she said the secret to her energy is in her new book Side Effect Skinny. The book is a mixture of health facts from good foods that give you some even better side effects to a seven day diet blast. Austin said she even added some tips for exercising, feeling happier and feeling more energized.

The Drs: Foods To Help Your Body 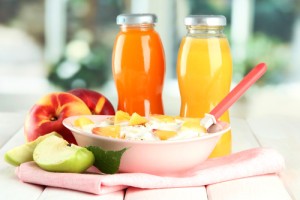 The Doctors invited Denise Austin on the show to review her new book, Side Effect Skinny, and learned the best foods for your body and a seven day fat blasting diet.

We all know food can help us be healthy but did you know some foods are extra healthy for certain parts of out body? Austin explained how the following foods can help specific parts of your body:

The Doctors: Eating Healthy When You Go Out To Eat

Denise Austin said on the seventh day of her  seven day diet plan, everyone is allowed to splurge a little bit, but they need to know how to splurge when they go to a restaurant.

Austin suggested getting corn tortillas instead of flour tortillas when getting Mexican food. She said it can save you up to 300 calories. If you are heading to a Chinese restaurant, Austin suggested ordering egg drop soup as an appetizer. The egg drop soup only has about 70 calories, while wonton soup has around 140 calories and hot and sour soup can have a lot more due to the large amounts of peanut oil.

As far as Italian food goes, Austin suggested ordering a whole wheat pasta dish with vodka sauce. Although the vodka sauce does have a small amount of cream in it, it is still going to be pretty healthy compared to clam sauce which has around 170 calories in the sauce alone.