Celebrity chef Rocco DiSpirito shared his tips for making Italian dishes more healthy on The Doctors TV show. DiSpirito is the author of the book Now Eat This! Italian.

Viewer Rosie comes from a big Italian family where recipes have been passed down from generation to generation. She loves the food but she’s worried about getting large. DiSpirito said that in Italy they eat this food all the time and don’t gain weight but in America we do. I can vouch for this – last month I visited my family in Italy and ate pasta every day but I didn’t gain a pound.

The Doctors: Meatballs with Brown Rice Cereal Instead of Bread 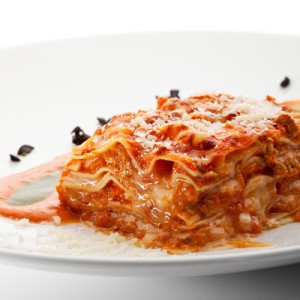 Lasagna is known for being both delicious and calorie-filled. Rocco DiSpirito’s healthy lasagna only has 307 calories per serving.

DiSpirito said that in Italian families, flavor is equated to love. In meatballs, DiSpirito uses puffed brown rice cereal instead of bread. Hmmm. He said there are only 30 calories per cup in it, and there is fiber and protein. He also uses low sodium chicken broth, egg whites instead of whole eggs and low fat beef and pork.

His mother’s original recipe which includes three meatballs and two ounces of pasta has 1500 calories in it and 91 grams of fat. His new recipe has only 341 calories in it for the same amount. It sounds good on paper, but I wonder how these “meatballs” taste. Would you try his recipe?

The chef uses an heirloom wheat called KAMUT to make his pasta, which has less gluten than regular wheat. DiSpirito claims it doesn’t taste like regular whole wheat pasta. Have you ever had whole wheat pasta? It’s probably the most disgusting thing I’ve ever eaten. It doesn’t even taste like pasta. I threw the rest of the box out.

DiSpirito had his family over for dinner for his mother’s birthday and didn’t tell anyone that he made the food this way and no one knew the difference. I’d imagine that this is because the real flavor comes from the sauce. Need more filling meal ideas? Try Rocco’s Margherita Pizza Recipe.

He used Panko bread comes, which are produced electrically, to make chicken parmesan. His old recipe had 1090 calories and 49 grams of fat, and his new recipe has 324 calories and 11 grams of fat. For more healthy advice, check out Rocco DiSpirito’s Strawberry Ice Cream Recipe.

The Doctors: Healthy Lasagna with Skim Milk and Zucchini

DiSpirito’s lasagna bolognese originally had 1170 calories and 68 grams of fat. His new recipe has 307 calories and 9.5 grams of fat. Usually he uses a white sauce with whole milk, butter and flour which is called a bechamel (pronounced like beshamella).

Instead, he made a sauce with skim milk, parmigiano-reggiano and a thickener called arrowroot. He also used whole wheat lasagna. He also replaced two layers of the pasta with zucchini to make a healthy lasagna.

Rosie said that he needed to come to her mom’s house to teach them how to make the food. Watch more of DiSpirito’s tips in this video: