The Doctors revealed some important facts on diet and drinking in the form of fun, informative challenges. First up were twins Alison and Kristen, who participated in the not-too-appetizing Nasty Nibbles Challenge. Would you give any of these foods a try?

Dr Travis Stork served up a buffet filled with some of the world’s grossest foods. It was Alison and Kristen’s job to eat everything on their plates without anything coming back up– although there were buckets right next to them, just in case! Let’s take a look at some of the gross but good-for-you foods that Kristen and Alison tried. 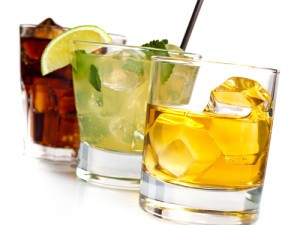 How much sugar is in your favorite mixed drink? The Doctors found out with the Sugar Showdown.

They may look like what’s found inside of a snotty tissue, but natto are fermented soy beans that are high in fiber and Vitamin K. Durian is a fruit that’s banned in several countries because of its terrible smell. However, it is very high in fiber and potassium.

While Alison and Kristen both (miraculously) kept their food down, Alison won the challenge and won a fantastic dinner cooked by an in-home chef. It’s a great prize, if she hasn’t already lost her appetite!

Everyone loves enjoying mixed drinks on a fun night out, but how many calories do they cause you to pack in? Audience member Carlie participated in the mixed drinks Sugar Showdown challenge.

Carlie was presented with four popular mixed drinks– a mai tai, a gin and tonic, a mojito, and a cosmopolitan– and was asked to arrange the drinks from highest to lowest in sugar content. Carlie was very close, mixing up only the last two. A mai tai has the most with 25 grams of sugar, followed by a mojito with 24 grams, a gin and tonic with 15 grams, and a cosmopolitan with 11.4 grams.

So, while it’s okay to indulge every once in a while, don’t forget that you don’t just eat your calories, but drink them too.