The Doctors reported on the recent repeal of a Department of Agriculture regulation. Now horses are allowed to be slaughtered for meat in the United States. Horse meat is a popular delicacy in other countries around the world.

Dr. Lisa Masterson, who wanted to be a jockey in college, said she sees horses as friends. Dr. Jim Sears said he doesn’t see the difference between slaughtering horses and other beloved farm animals, like pigs, chickens, and cows. 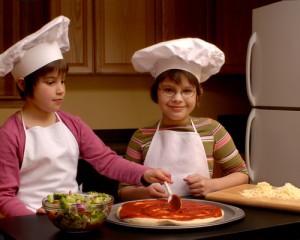 It's easy to mix healthy vegetables into your pizza sauce at home, and kids don't have to know.

Dr. Andrew Ordon said there is something about horses that makes him feel they don’t fit in this category. Dr. Travis Stork said it’s similar to the way we feel about dogs, which are also eaten in other countries. He said hopefully this conversation will get people to think about the types of meat they are eating, and where they come from.

The Drs: Pizza Counts As A Vegetable?

Congress recently declared that pizza is a vegetable. Since it contains tomato sauce, it counts as a vegetable when it comes to school lunches.

The Doctors think this sets a bad example for kids, who will always choose French fries over green vegetables. Dr. Travis Stork called school pizzas crap when it comes to nutrition.

The Doctors said potatoes are a good vegetable source, but French fries aren’t the healthiest way to consume them. They recommend trying baked potatoes instead.

Dr. Jim Sears said you can make healthy pizzas at home, using whole wheat crust, extra sauce, and going light on the cheese. You can also make special requests when you order pizza for delivery or at a restaurant.

Dr. Travis Stork recommended blending vegetables such as carrots into your pizza sauce. The Doctors tried a slice of Fresh Brothers Pizza that had a blend of five vegetables mixed into the sauce. You couldn’t tell by looking at it, and everyone seemed to enjoy the taste.