The Doctors: Is There Arsenic in Rice?

Recent studies about Arsenic in Rice have been in the news a lot lately. Dr. Travis Stork said one study from Consumer Reports said that if you eat rice once a day, you could increase arsenic levels in your body up to 44%, which is a worrisome level.

Dr. Lisa Masterson said they tested infant cereal, rice, pasta and drinks and found that brown rice, which is thought to be healthier than white rice, has the most arsenic in it. The reason for this is because the arsenic is found in the outer layers of rice, and white rice is polished so it removes some of it. 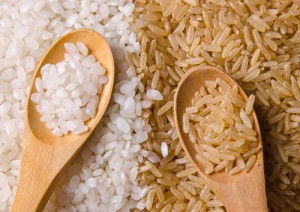 Arsenic in rice occurs naturally but has been a hot topic lately. Find out what you need to know and learn the arsenic poisoning symptoms before it’s too late.

Dr. Urvashi Rangan, who is the lead scientist on this study, said that their goal is not to alarm people, but it inform them. Because of how rice is grown, it tends to take up a lot of arsenic through the soil.

Dr. Rangan said that adults should limit their rice consumption to two 1/4 cup dry serving a week. I checked a bag of brown rice that I have in my pantry and 1/4 cup of dry rice equals one serving. Dr. Rangan said that most Americans eat 2 1/2 servings a week, so this isn’t a huge cutback.

She said as far as children go, when it comes to rice milk and rice beverages, they shouldn’t really be drinking them. They should also only have a cup and a half of rice cereal per week.

Dr. Rangan said that brown rice from California actually had less arsenic in it than white rice from the south central United States. Cooking one cup of rice to six cups of water has also been shown to reduce arsenic levels by 30%.

In the summer of 1972, Donna and Jim got married. In the summer of 1991, Donna’s health started going downhill. She was delirious with a 105 degree fever, and Jim took her to the hospital. She was packed in ice to try to bring her fever down, and doctors did countless tests.

One of the tests was a heavy metal screening, but the results were negative. Jim was the perfect nurse once Donna was home, and was always willing to make her something to eat. However, Donna was getting sicker with each passing day.

Donna was unable to keep anything down, and Jim brought her a glass of milk. When she was done drinking it, there was pink residue at the bottom of the glass. Jim’s answer was “that’s that discount milk, you know it gets like that sometimes.”

The Doctors: Seizures and Paralyzation From Arsenic Poisoning

When she woke up, she was worse than ever. Donna experienced seizures and her heart stopped between five or seven times. She couldn’t speak and was paralyzed from the nose down.

Everything changed one day when a nurse overheard Jim using somewhat inappropriate phrases over the phone. The nurse was appalled, and then overheard him say arsenic. The doctors ordered another metal test, this time from Donna’s hair.

There were seven to 10 times the lethal limit of arsenic in Donna’s system. Apparently, Jim was poisoning Donna for three years.

Donna said the nurse overhearing Jim saved her life. He had been bringing milkshakes to the hospital filled with poison.

Donna said she still only has partial feeling in her hands and feet and has to worry about walking, but she is out of leg braces. She is remarried, singing, dancing and life is good.

As for Jim? He’s in prison and has been for years. Unfortunately, the state of Missouri has changed their laws and he comes up for parole next month. Dr. Jim Sears said that maybe she should take him a milkshake to celebrate.

The Doctors: Arsenic is in Water and Weed Killers

Dr. Stork said that Arsenic is a naturally occurring element. In places like Bangladesh, millions of people are exposed to arsenic daily in their ground water and have poisonous amounts in their systems.

He said it’s not just arsenic poisoning that we need to worry about, because it does get into ground water and is used in some insecticides and weed killers. If you’re having nonspecific symptoms, think about if you could have been exposed to anything like arsenic.