With summer in full swing, many of us are still trying to lose weight or get in shape. The Doctors highlighted over a dozen unique ways you can promote weight loss this summer. So far, their list has included Seaweed Bread and Pantyhose. Next, they looked a Protein Alternatives like Hemp Protein Seeds and Cashew Cheese. Then, Richard Simmons visited to talk about the concept of Body Suicide. 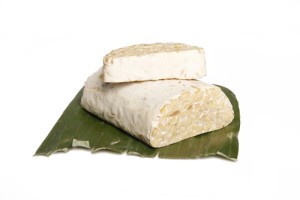 The Doctors shared protein alternatives, including Tempeh, before getting insights about Body Suicide from Richard Simmons.

Dr Jim Sears showed off a hemp plant, explaining that most people think of hemp products such as clothing or rope. “But the hemp seeds are actually a great source of protein,” he said.

Hemp Protein Seeds can help curb cravings, and it has “almost undetectable amounts of THC,” the active ingredient in marijuana. Dr Jim said that there are many options for adding a new protein to your diet.

You can also shop for Hemp Protein Powder to get a protein boost in your diet. There are few allergies to hemp, and it’s green because chemicals and pesticides aren’t used. Dr Jim even served Hemp Smoothies, using the protein powder, bananas, and almond milk.

Dr Lisa Masterson and Dr Travis Stork didn’t enjoy the taste of their Hemp Protein Shakes, so they offered their own alternatives. They included Tempeh, which is made from Soybeans. Four ounces of Tempeh has 21 grams of Protein.

Another option is Cashew Cheese, which has 20 grams of Protein in a single cup. “That’s more than a cup of Lentils,” Dr Lisa said. Dr Travis reported that the spice mix in the Cashew Cheese was tasty.

What Happens When You Eat Protein

Eating more Protein than simple Carbohydrates can be a big boost to weight loss. It’s an important component for the body’s natural functions, and Dr Travis used an animation to demonstrate how the acids and enzymes in your stomach break down a Protein into Amino Acids.

Those acids travel to the intestines and get absorbed into the bloodstream, traveling throughout the body’s tissues to promote healthy cell growth. “Every cell in the body needs those Amino Acids,” Dr Travis said, adding that extra Protein makes the brain more satisfied.

Boosting your Protein consumption by 30% could make you consume almost 450 fewer calories in a day, according to the results of one study. “Protein helps you feel full. It takes longer to digest,” Dr Travis said.

The Doctors: Fake A Butter Allergy

The team’s next tip involves a little lying. Dr Andrew Ordon said you can fake a butter allergy when you go out to eat, so you can avoid the hidden fats that aren’t listed on the menu. He said you wouldn’t order two tablespoons of butter with a meal, but that’s what you’re getting in a side of mixed veggies.

“This is probably the only guaranteed way to avoid that allergy,” he said, because restaurants hide calories and fat in dishes.

The Doctors audience wrote down their own reasons for wanting to lose weight. To help them stay motivated and set achievable goals (or punish the audience), the team welcomed weight loss expert Richard Simmons to the show.

Richard Simmons came out wearing peacock wings and inappropriate shorts showing off his pasty legs, a spectacular complement to his frizzled, thinning clown hair. Let’s not even talk about that ‘80s workout attire.

Dr Travis Stork said that one audience member needed Richard’s help because of his family history and out of a desire to increase his “endurance in the bedroom.” The man, DeShawn, was in the audience, and he said he wants to skydive, but he needs to lose 30 pounds.

DeShawn was age 26 and weighed 280 pounds. Richard Simmons told DeShawn about the idea of Body Suicide: “When we don’t take care of ourself, we slowly die. Every time you overeat, every time you get a little lazy and not work out, you are committing body suicide,” he said. “This is your only body, and you have to take care of it for the rest of your life, ‘cause no one can do it for you.”

Richard Simmons put together a gift basket of DVDs, a cookbook, and some hideous glittery shorts for DeShawn to work out at home. He also gave DeShawn a scholarship to his Los Angeles fitness center.

Then Richard and DeShawn got up and got the audience moving. I guess if Richard Simmons and his crazy energy can motivate people, that is a good thing, but I’d see him as more of a threat, and I’m not sure that fear is the best weight loss motivator.