Author of “The Fallacy of the Calorie” Dr Michael Fenster joined The Doctors to prove that heart-healthy foods can be used in some tasty recipes. Dr Fenster began by saying it was a myth that you can’t have red meat if you want to protect your heart. He further explained that it’s all about choosing quality meat. He used organic, free-range pastured beef tenderloin seared to medium-rare. He served it on a flat-bread made with ancient grains and topped it with tomato jam, chimichurri sauce, roasted tomatillo, Asian pear, and a little blue cheese.

A recent study has shown that choosing your meat properly can increase heart-healthy, anti-inflammatory omega-3s by almost 50%. Portions, of course, are important. One tenderloin can feed four people, so you shouldn’t go overboard and eat giant steak. 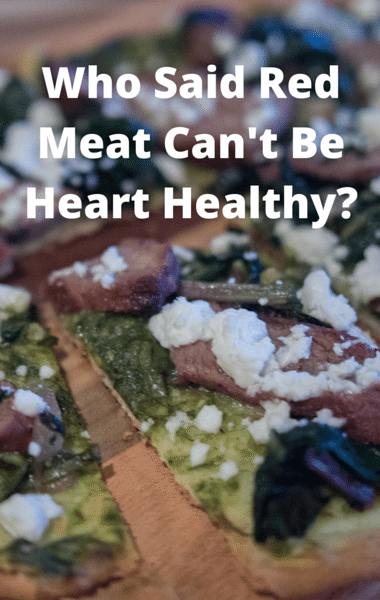 A cardiologist explained why red meat and pasta don’t have to be banned from your diet entirely if you’re focused on heart health. (edsel_ / Flickr)

Dr Fenster also wanted to bust the myth that pasta is a no-no. The Mediterranean diet is incredibly healthy, and pasta is a big part of that. He suggested focusing on the type of pasta you buy, like pure, important Italian pasta that is made only with durum wheat. He also mixed asparagus and fresh herbs with the ancient grain pasta, as well as crab, to make for a cold pasta dish that could also be served warm. Adding good olive oil at the end also has nutritional benefits. It’s all about choosing quality ingredients and controlling your portion sizes.

To explain what really works when it comes to anti-aging skin care, Dr Sonia Batra joined The Doctors. She first stressed the important of a healthy diet, regular exercise, and not smoking. It’s also important to pick quality products with good ingredients that can rejuvenate the skin. When you’re in your 20’s, you have a good amount of collagen that keeps your skin firm and supported. As you age, your collagen levels decline and you lose that support, leading to wrinkles. She first recommended protected your skin with sunscreen and vitamin A because it can help with skin turnover.

Vitamin C can also help reverse sun damage and protect against free radicals that cause premature aging. A diet high in vitamin A and vitamin C is important, as well as skin care products that contain peptides. Peptides are small proteins that help stimulate the production of collagen, and also promote cell turnover to leave you with firm and smooth skin. It could be a good idea to add a serum to your regimen, such as the No7 Protect and Perfect Advanced Anti-Aging Serum that you can find at Target for less than $30.

Would you ever consider eating purple bread? When you digest highly refined bread, your blood sugar spikes. According to a new study in Singapore, a new kind of bread could slow the digestion of those sugars by 20%. Purple bread is made with sprouted black rice powder, which is where it gets the purple color. The Doctors enjoyed the taste and scent, but said they’re most likely going to stick to their ancient grain bread.

Scent was the word of the day and you can use the word scent on The Doctors’ website to enter for a chance to win Hanae Mori Butterfly perfume.

As part of their News in 2:00, The Doctors reported that the Pink Lotus Foundation provides free breast cancer care for low-income, uninsured, and under-insured women. The foundation’s founder, Andy Funk, is about to break world records by taking part in a fundraiser that will take him from Los Angeles to Las Vegas in less than 24 hours, on a bike, without assistance or rest. The ride will take place Saturday April 23.

After two decades of research and clinical trial, the world’s first ever vaccine for dengue fever has received the endorsement of the World Health Organization. Dengue fever is a potentially deadly mosquito-borne virus that affects more than 300 million people in 120 countries each year. The heaviest concentrations of the virus have been in Southeast Asia, Latin America, and Africa. In recent years, cases of the virus have been reported in Hawaii and Florida.

Nancy Davis held her 23rd Race to Erase MS event, which raised over $1.6 million to fund treatment, research, and help find a cure for the debilitating disease. Sharon and Kelly Osbourne opened up about Jack’s journey with the disease, saying that anyone who wakes up every day having to face MS is a hero.