The Doctors made another stop at the Food Pharmacy with foods to add to your grocery list for superfood health benefits. Learn why you need to try Watercress, Kimchi, Macadamia Oil, and Black Rice.

Watercress has more calcium than a glass of milk, and surprisingly it also contains more Vitamin C than an orange. It also has more Iron than Spinach, according to Dr Rachael Ross. You can use it on sandwiches or salads.

Watercress is believed to decrease inflammation and could have anti-cancer properties. Dr Travis taste tested it onstage. 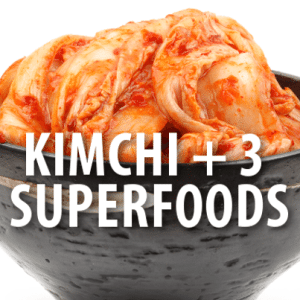 Dr Rachael credited Kimchi with “helping Korean women to look gorgeous, their skin flawless, and keep the calories low.” It is a spiced, fermented cabbage, and she said that you either like it or you don’t. It’s low in calories and Dr Ross said it’s anti-inflammatory.

She added that the average Korean woman eats about 40 pounds of this per year. It is rich in antioxidants and also contains beneficial probiotic bacteria. Dr Travis smelled it for the first time, calling the scent intense.

You probably know about Olive Oil. But Macadamia Oil has the same caloric content as well as a higher smoking point. While you can’t fry with olive oil, you can cook at higher temperatures with Macadamia Oil.

Macadamia Oil also has more monounsaturated fats. However, it is going to cost more than Olive Oil. As a bonus, it has some beauty properties. It may even be in one of your favorite moisturizing products already.

Dr Travis Stork said that it’s great to have some variety in the oils you use on a regular basis.

This food has be so valuable historically that emperors used to keep it only for themselves. Dr Rachael said it is the #1 thing you need on your grocery list. Black Rice or Forbidden Rice is high in antioxidants and nutrients, including anthocyanins. Unlike White Rice, Black Rice is a complex carbohydrate with various health benefits. Have you tried this at mealtime yet?

Flu Season takes up a large portion of the year. The Doctors shared three ways you never expected that you could come down with the flu. Here is what you should avoid.