Andrea, 17, and her sisters Sophia and Mariana have always been incredibly close. In the winter of 2015, Andrea was having trouble sleeping because of neck pain. An x-ray revealed a tumor in her chest and a biopsy led to a diagnosis of Hodgkins Lymphoma. Andrea immediately started crying, thinking about losing her hair and even the chance to be “normal.” From then on, she decided that her diagnosis was only going to be a phase of her life, not the end of it. She was determined to get through it the best she could, without letting it slow her down. That’s exactly why she chose to do a photo shoot as a princess, despite having no hair. 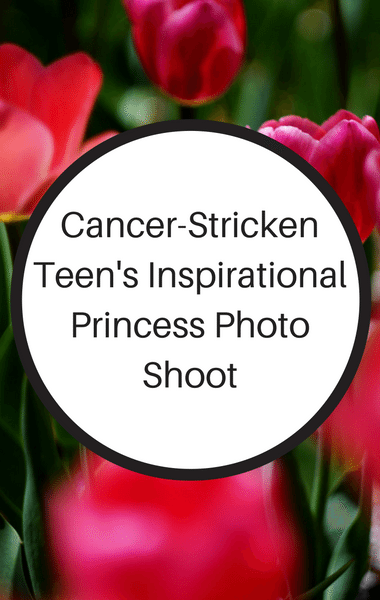 The Doctors shared the incredible story of a teen who, while battling cancer, inspired everyone around her with a beautiful photo shoot. ([email protected] / Flickr)

Andrea has been using a heavy combination of chemotherapy and radiation for the last five months. As soon as she would leave the hospital and be with her sisters again, she would feel instantly better. For Sophia, Andrea isn’t just a sister, she’s a role model. Andrea chose to not let cancer define her, and instead appreciate what she has, while living as positively as possible.

Andrea joined the show, with her two sisters in the front row. Andrea shared that she’s now done with her treatments and is just waiting on the results of her latest scans. She then explained that the princess-themed photo shoot was the result of her wanting people to know what she was going through. Being a teenage girl was hard for her simply because she lost her hair, but she didn’t want to let that keep her from being a princess. She decided to simply “own it.”

Andrea stressed the importance of staying on top of your health. She was lucky in that she saw a doctor as soon as she noticed something was wrong. She also encouraged people to pursue what they love, even while battling cancer, because it’s those hobbies that can be such a light in a dark time. Dr Travis Stork reminded everyone that there’s actual research that has shown how much of an impact a positive attitude can have in terms in health.

Express then surprised Andrea with $3,500 in a gift card for a new wardrobe and Benefit Cosmetics gave her a year’s worth of makeup worth $5,000!

Switching gears, The Doctors then shared the shocking 9-1-1 call made by a woman who claimed her husband “accidentally ate some pot brownies” and may have overdosed. She explained that he ate the brownies and didn’t know there was THC in them. The 53-year-old dad eventually slept it off. He ended up crawling around on the floor, cursing at the cat.

Dr Travis explained that when you eat something, it takes a lot longer to get into your system than when you smoke it. If you do enjoy edibles, be careful to not leave them lying around for someone else to find.

The Doctors: Which Is Worse, Flat Iron Or Blow Dryer?

Do you know which is worse for your hair: a blow dryer or a flat iron? Dr Sonia Batra revealed that it’s actually the flat iron because you’re exposing your hair to higher temperatures. Try to use a flat iron sparingly and with heat-protective spray.

Simple was the word of the day and you can use the word simple of The Doctors website for a chance to win a Daphni hair straightening brush.

For The Doctors’ News in 2:00 it was reported that more than 132,000 pounds of chicken nuggets have been voluntarily recalled. Tyson Foods issued the recall after the discovery of a hard, white plastic substance in nuggets sold at Costco stores across the country. No injuries have been reported and Tyson claims the recall was out of an abundance of caution.

The CDC has reported that five people have been hospitalized due to E coli contaminated beef. The source is most likely tied to beef products produced and distributed from a farmhouse in Massachusetts. E coli is potentially fatal and can cause dehydration, diarrhea, and kidney failure.

The 2016 Revlon Luncheon brought several stars together to raise awareness about various issues, including the Love is On Challenge. Revlon is a company that truly cares about women, and celebrities like Halle Berry were happy to be a part of it.