The Doctors talked to Molly Ortwein, one of the 2.6 million breast cancer survivors in the U.S. She tearfully told the story of how she found out she had breast cancer, which was when she was waiting for her bags at O’Hare airport. Molly Ortwein decided to get a tattoo to cover the scars on her breasts.

Colby Butler, her tattoo artist, said, “Tattoos can help in the healing process if you’ve gone through a cancer or a surgery or had an accident, sometimes putting a tattoo in that spot can help you move forward to either forget or to make it a more beautiful thing.” 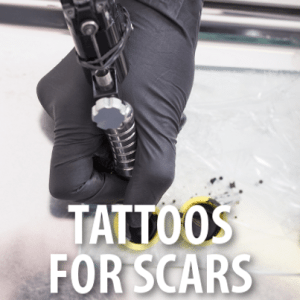 The Doctors talked to Molly Ortwein, founder of Personal INK, about her non-profit’s work in giving people with mastectomy scars tattoos to feel empowered and beautiful. (Dirk Ott / Shutterstock.com)

Now Molly Ortwein is the founder of the non-profit Personal INK. Molly Ortwein said that she didn’t know a lot of the things that would happen to her after a mastectomy, including losing not only her breasts, but her nipples. She said that breast cancer is treated like a salacious topic and it should be far from that. For instance, no one told her she was going to lose all feeling in her chest area. Dr. Jennifer Berman said that Molly’s work with her non-profit help women feel beautiful and empowered.

The Doctors: Importance Of Tattoos For Breast Cancer Scars

All hour, one of Personal INK’s tattoo artists, Shannon, had been working to put a tattoo on a mannequin. She put a lotus blossom on one side and a peacock feather on the other side. Dr. Rachael said that there’s often a lot of meaning to tattoos and this is an amazing example of that.

Dr. Rachael said that it’s important to consult your physician before getting the tattoo, because you might not be able to do it. Molly said that the ink is non-toxic and it’s organic in her company. Molly said that Personal INK offers both semi-permanent and permanent tattoos and that women can decide what’s right for them.