Donna Mills and Michele Lee, 1980s stars known for their roles on Knot’s Landing, appeared on The Doctors TV show to share their beauty secrets. Lee had an injured ankle from tripping, but still jokingly tried to box Mills out as they greeted the doctors.

Dr. Travis Stork said that Mills had aged incredibly. Mills said that she got sick and tired of having to look good every day, which is one of the reasons why she wanted to leave the show.

The Drs: Donna Mills and Michele Lee Dance to Stay in Shape 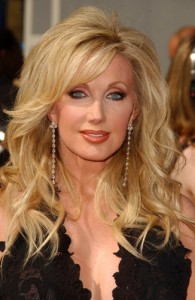 The Doctors TV show demonstrated how to get Morgan Fairchild’s lips, and keep your lipstick on during dinner. (s_bukley / Shutterstock.com)

Mills said that if you want to look good, you have to gauge it to where you are in your life. Lee said that it’s not so much the makeup you wear, it’s how you wear yourself through time.

Mills said that if you didn’t feel good and if you had a difficult life, it would show on you. Lee said that smiling a lot also helps.

Mills said that she has a ballet bar in her home gym and thinks it helps her a lot. She used to dance when she was younger and this provided her a foundation for being in shape. Lee said she also likes to dance and she thinks stretching is extremely important as she ages.

Another ’80s star, Morgan Fairchild, joined Mills and Lee on stage. Lee commented on how Fairchild has no pores.

Fairchild said that with her mother’s generation, there was a certain way you were supposed to dress as you aged. She said her generation has refused to grow up. She said you should look gracefully your age without trying to look 16.

The Drs TV: How to Get Morgan Fairchild’s Lips

Amanda, a Fairchild fan, sent in a video and asked how the star gets her full lips. Amanda appeared on the show to learn how to make her lips look fuller and how to keep her lipstick on through dinner.

Fairchild said that you want a smooth surface to work with, and applied foundation to Amanda’s lip line and chapstick to her lips. She then put powder on her lip line to help grab the lipliner.

She recommended putting lipliner just outside of the lips to make them appear wider. She then put the liner across Amanda’s lips to help blend the liner and the color.

Fairchild said that many women try to wear a dark shade of lipstick that they wore when they were younger, but it actually just makes them look harder. She said it’s better to go with a slightly lighter shade. She applied a little gloss to Amanda to give her some shine.

In terms of keeping your lipstick on through dinner, Fairchild said that you should take small bites and only use your teeth on the fork. Dragging the fork through your lips is how your lipstick will get ruined.

When you need to take a drink, you should use your tongue as a brace against the cup. Find out more lipstick secrets from Fairchild in the video below.