The Doctors tackled the latest weight loss trend: sugar-free foods. They explained that these so called diet foods could actually result in “digestive disasters.” Candy, cakes, and ice cream, can all come in sugar-free forms, but certain ingredients in those sweets can cause bloating, gas, and even diarrhea. 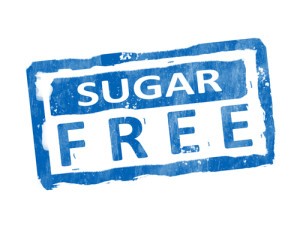 The Doctors explained some of the possible nasty side effects of sugar-free foods. (Studio_G / Shutterstock.com)

The Doctors welcomed Dr Jorge Rodriguez, who explained that a lot of people eat the snacks thinking they’re avoiding calories, but what they end up doing is “losing some weight on the toilet because it goes right through you.”

The Drs: Negative Side Effects Of Sugar-Free Foods

Dr Rodriguez further explained that the molecules are much larger than sugar molecules so when they get into the small intestine, they don’t get absorbed. Bacteria then ferment the molecules, causing gas.

When it gets into the colon, it brings in water, making your stool even softer. Dr Travis Stork explained that you really only need about ten grams to experience the negative effects, so they looked at a few different sugar-free products to see how many of them you’d have to eat to be effected.

Some of the packages even say “excessive consumption may cause a laxative effect.” Dr Rodriguez said if you’re diabetic, the candies really aren’t the best thing for you. He said you need to eat natural sugars in small amounts. Dr Stork said he was dumbfounded that ten grams can cause laxative effects, whereas 27 grams of the sugars are in three pieces of the candy. Three pieces definitely isn’t excessive consumption. Dr Stork said if you follow the latest fad, you’re doing your health no favor.

The Drs: Blur Creams Put To The Test

The Doctors then wanted to take a closer look at a beauty cream that promises to perfect your complexion. Their producers put the “miracle blur creams” to the test. Leslie, one of their producers enlisted Carlie and Stephanie to put three different blur cream brands to the test. They used a high end cream, “middle of the road” brand, and one that you can pick up at your local drug store.

Carlie and Stephanie took off their makeup and put the creams to the test, starting with the $55 Lancome Visionnaire blur cream. They put it only on the left side of their faces to make a comparison. Then they tried the Nanoblur $15 cream and said they felt tingling. Lastly, they tried Garnier’s 5 Second Blur which cost $15. The women said it felt like they were putting on lotion.

Carlie’s favorite was the Nanoblur, but said she probably wouldn’t use it instead of foundation, although she did notice a difference. Stephanie liked the Garnier product the most, but said she would use it more as a primer, while still putting makeup on over it.

Dr Drew Ordon said the changes were subtle. As The Doctors said, it’s one more thing to add to your beauty arsenal.