The Drs: Negative Side Effects Of OTC Medications

A young woman explained that in 2009 she was sitting at dinner when she all of the sudden had a burning sensation go throughout her body. She went to the emergency room where the doctors and nurses there had never seen anything like it. She was tested for all kinds of disorders including leukemia and lupus. She had 75 different blood tests taken but all of them came back negative. 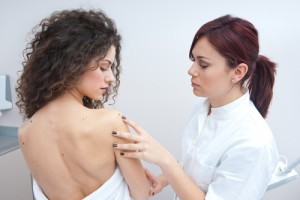 The Doctors heard from a young woman who had a severe skin reaction to over-the-counter medication. (dean bertoncelj / Shutterstock.com)

Her mom had flown into town and saw that her daughter was bleeding from the corners of her eyes and was covered with dark spots. A few months later she went to the doctor’s office where he noticed that her condition was getting worse. He gave her some Naproxen hoping it would help, but in the meantime she had another reaction.

She and her mom went to her aunt’s house to have dinner when her muscles started to feel really sore. She took a Naproxen and about 30 minutes later her body started to go into shock. Soon after that she told her mom that it was the Naproxen. She knew she shouldn’t take the medication anymore but wasn’t sure what she should do about her body without it. Even six years later, she still has discoloration.

Her name is Lauren and she and her mother Nancy joined The Doctors. Basically what happened is that her body was having a bad reaction to the Naproxen. Dr Travis Stork said too many people don’t realize that they could have reactions to over-the-counter medications.

Dermatologist Dr Sonia Batra explained that about 2-3% of people taking over-the-counter medications can experience some sort of skin rash, but the kind that Lauren had is less common and is called a fixed drug reaction. With a fixed drug reaction, it generally just starts with one or a few plaques, and the reason it’s called fixed is because it always comes back in the same place. She said it can be hard to diagnose because it doesn’t always happen with something you take all the time.

Dr Batra said that because the reaction is right at the level of skin where you have pigment, it always leaves hyper-pigmentation. Laser treatment can help, but sometimes it takes multiple treatments if the discoloration is deeper in the skin.

The Doctors surprised Lauren with three laser treatments in Kansas City to help with the hyper-pigmentation.