The Doctors took a closer look at the story of a young woman whose life has been affected by her embarrassing skin condition. She explained that when she was 8 years old, she started to notice dark spots on her skin. She started to always wear her hair down to hide the embarrassing spots on her skin, and explained that she’s had three kids and after having each of them, her skin condition has gotten worse. 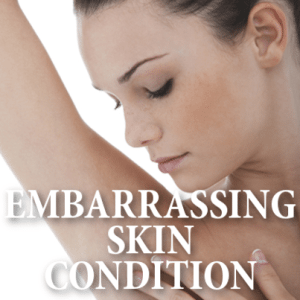 The Doctors took a closer look at a woman’s struggle with her embarrassing skin condition and helped her find a solution. (stefanolunardi / Shutterstock.com)

She has dark spots on the back of her neck, her armpits, and her thighs. She also has skin tags on those parts of her skin as well. She described the feel of her skin as like that of an elephant and said it affects her life in more ways than one. She said she wishes she could just wear her hair up, and said it’s even affected her relationship with her husband. When they try to get intimate, she doesn’t want it because she’s embarrassed about her skin.

The Doctors sent the woman, Mayra, to see dermatologist Dr. Sandra Lee to solve the problem. Mayra broke down to Dr. Lee and said she doesn’t feel pretty because of her skin. Dr. Lee told Mayra she was pretty sure she had a skin condition called Acanthosis Nigricans. Dr. Lee said she thought the condition could get better, but wanted to do some tests to be sure of what was going on. She also wanted to remove as many of the skin tags on Mayra’s skin as she could.

After having a lot of the skin tags removed, Mayra began to cry and said her skin was then a lot closer to what she wanted.

Mayra and Dr. Lee joined The Doctors on the show. Dr. Rachael Ross said that Dr. Lee is “trained to snip” when it comes to skin tags, and you shouldn’t just snip at the tags at home. Dr. Lee showed that Mayra has small folds in her skin and that’s what gives it the “bristly” feel. Dr. Lee said the skin condition can also be a sign of an increased risk of diabetes, but said that Mayra’s blood sugar levels were normal, as well as her insulin levels. But Mayra still had to keep it in mind.

Dr. Ross explained that the increased levels of insulin are what led to the darkened skin, so Mayra had to work with her doctor to control it. She also suggested that Mayra lose weight and eat healthy in order to improve the skin condition. Dr. Lee said the skin condition is associated with weight gain, saying the skin can only really be lightened by losing some weight. Dr. Lee also offered some remedies to try to thin the skin and lighten the color.

Dr. Travis Stork said Mayra should see the skin condition as a way to be inspired to start living a healthier life and potentially avoid diabetes that she otherwise would’ve gotten.