So up until last week, gastroenterologist Dr. Jorge Rodriguez wasn’t known as Dr. Disgusting on The Doctors. But this week, he is. And he specializes in only the most disgusting and gross medical conditions no one ever wants to talk about. I think Dr. Disgusting is a genius idea. We need a doctor on the air that will tackle this gross stuff. 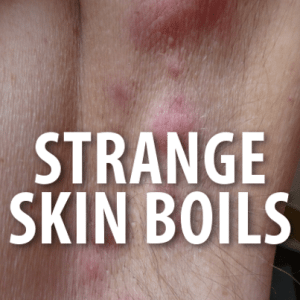 Dr. Disgusting talked to Jessica, who suffered from Hidradenitis Suppurativa, and arranged for her to be seen by Dr. Sandra Lee.

Dr. Disgusting talked to Jessica about her mysterious skin condition. Since she was 12, she’s been getting boils underneath her left armpit to her abdomen. They range anywhere between a dime and a golf ball in size. Jessica doesn’t wear tank tops because she’s embarrassed by the way they look. She said they’re also incredibly painful. “It’s been really hard. I mean, I’ve lost friends. I’ve lost relationships. I feel miserable. I’ve heard comments such as, ‘it looks like your skin has been caught on fire.’ It doesn’t make me feel like a person,” she said.

Dr. Disgusting looked over the boils and examined Jessica. He discovered it was normal skin bacteria and that the important thing was to prevent that bacteria from being caught under the hair follicles to prevent them from becoming abscesses. He demonstrated it by showing a glass of water, which he added olive oil to. The olive oil floated to the top. Dr. Disgusting showed that the water was the bacteria of the hair follicle and the oil represented the sweat of her body. He added a drop of coloring to the water, but the coloring couldn’t be seen because it was blocked by the oil. He showed that Jessica’s sweat was acting like the oil, blocking anything from getting down under there.

Down the road, there may be a cure or new treatments available for hidradenitis suppurativa, but right now, there isn’t much. Dr. Sandra Lee arranged for the North Dallas Dermatology Associates to treat Jessica at least once a month. Jessica thanked Dr. Sandra Lee for the help.