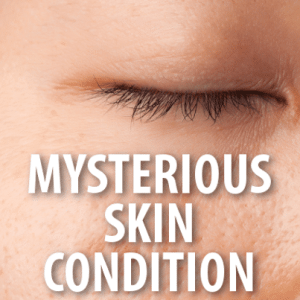 She said it’s affected her professionally, because her bosses in the past have seated her in the back, away from clients. Kay said she didn’t want to pass this onto her kids. Her mother also had this weird condition and she’s the only one of her siblings to have it. Dr. Rodriguez said he thought he could find an answer for her. He sent her to board-certified dermatologist Dr. Sandra Lee.

The Doctors: Biopsy For Skin Condition

Dr. Sandra Lee said she didn’t think what Kay had was contagious, but she did want to do a biopsy. She also wanted to make it look better for her. Dr. Lee took out the biggest ones around her eye and mouth and flattened the skin down. Kay was very touched when she saw her face after Dr. Lee did her work and admired the cosmetic improvement she’d done on her face.

The Doctors: What Is Brooke-Spiegler Syndrome?

Dr. Lee said that what Kay had was an extremely rare condition called Brooke-Spiegler Syndrome, which is a benign skin tumor or growth of the hair follicles. The tumors occur in the sweat glands or hair follicles. It means that Kay has a mutation in one of her genes and so did her mother.

Dr. Rodriguez said that doctors use the word tumor whenever there’s an abnormal growth. It doesn’t mean cancer. He also said that Kay’s kids may not get the gene. They’re definitely not destined to have it.

Dr. Lee said there’s no definitive treatment for the condition. But she noticed the biopsies have healed nicely, making the skin condition much more knowledgeable.

The Doctors hooked up Kay with a year’s worth of skin treatments from a plastic surgeon in her area who had worked with Brooke-Spiegler before. Kay couldn’t believe it.