Do you shower at night or in the morning? Is one better than the other? Dr. Andrew Ordon said this is a matter of individual preference. You do lose dead cells and sweat at night. Contrary to popular belief, taking a warm shower may actually relax and soothe you, helping you sleep better.

Dr. Jim Sears said he has to wash his hair every morning, because he wakes up with serious bed head. Dr. Travis Stork prefers to shower at night, after he works out. 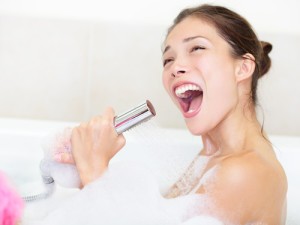 Answers to your questions about shower routines and bath hygiene.

The Drs TV: Showers Vs Baths

Viewer Carol asked if dirty bath water can get into the genitals and cause health problems. OB/GYN Dr. Lisa Masterson said when the vagina is not opened, it is flat and closed, so if you stick to soaping the outside and don’t rub too vigorously, bath water will not get into the vagina.

Dr. Jim Sears: Is It Normal To Lose Hair In The Shower?

Dr. Jim Sears said it’s normal to lose about 100 hairs each day. More than that is extreme hair loss and may be cause for concern. Only 90% of your 100,000 hair follicles are active at a time. The inactive 10% are dormant, and those hairs are the ones that will fall out.

Shampooing and showering does not cause hair to fall out. The hair you see has already fallen out and was loose. If you’re seeing handfuls of hair coming out, that may indicate other problems. Changes in diet may affect the rate at which your hair falls out.

Carol from St. Louis said she is a college student who shares a bathroom with six other people. She is grossed out when she finds pubic hair on the shower soap, and she wanted to know if it’s unhygienic to share soap.

Dr. Travis Stork said sharing soap is not unhygienic, as long as you rinse it off before and after. If you are sharing a common bathroom, you can also use liquid soap or body wash.

The Drs TV Show: Is It OK To Skip a Shower After a Workout?

A Twitter viewer said her husband waits hours to shower after going to the gym. She wondered what health risks this might pose to him, as well as herself. Dr. Travis Stork said a hot shower after working out can increase the chance that you may pass out.

Either wait 20 minutes before a hot shower, or take a cool shower following your workout. Theoretically, there could be staph or other germs floating around the gym. But waiting a little while to shower probably isn’t going to cause any problem other than unpleasant smells.