The Doctors: Could Nail Polish Be Making You Fat?

Could your nail polish actually be making you fat? Researchers at Duke University found that chemicals in nail polish could disrupt your hormones, leading to weight gain and other problems. TPHP is the chemical, and it’s an endocrine disruptor in many popular brands of nail polish. Dr Jennifer Ashton said to be clear, almost every top brand of nail polish sold in the U.S. contains this chemical. The Duke study looked at 26 subjects and tested urine for the chemical. Right after having their nails done, they found the endocrine disruptor in every single subject that was seven times higher than in those who had, had nail polish on for a longer period of time.

So should you stop painting your nails? Obviously more studies are needed, but what should you do? Dr Rachael Ross said on a daily basis, you expose yourself to so many chemicals, so try to read bottles and limit the amount of chemicals going in. There’s always a risk, so try to minimize your exposure as much as possible. Go ahead and try to not paint your nails for a little while, but just overall be more aware. 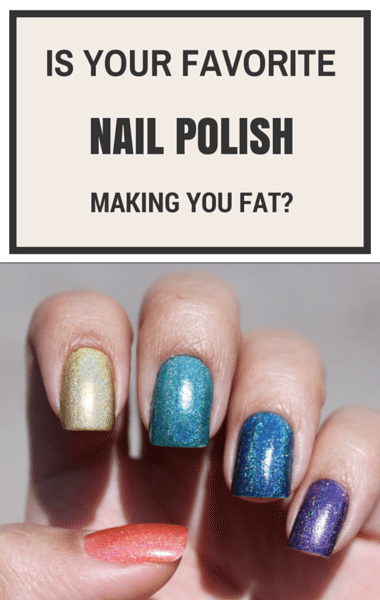 The Doctors explained why painting your nails could actually be causing you to gain weight. (leleuzis / FLickr)

Do you regularly paint your nails? Will you consider cutting back?

The Doctors: Rats Fighting Over Pizza

The Doctors then moved on to remind everyone about the New York Pizza Rat, saying that he apparently has some competition. They showed a video of two rats fighting over a slice of pizza. If nothing else, it certainly makes for an entertaining video!

The Doctors then shared a video of a news report about a New Jersey woman who was getting chemotherapy for breast cancer. The woman is fighting the DMV because she wears a scarf on her head to cover her bare scalp, while undergoing chemo. She was upset that her drivers license photo showed her wearing the scarf, saying that in a couple months when she finishes chemo, that photo will no longer look like her. She asked if she could just use her old picture which looked more like her and the DMV said no, saying it wasn’t their policy.

To have a daily reminder of her cancer on her drivers license is emotionally devastating for her and damages her healing process. Joanne Jodry joined the show over Skype and said she’s doing well, and it’s all going to work out. She said she and her daughter were pretty upset with the DMV, and she contacted her assemblymen, who ignored her. A different New Jersey assemblyman just sent her a draft to change the law, allowing her to use her old photo. Joanne’s daughter, Mary said she was so happy for her mother.

The Doctors surprised Joanne with a portrait and print package to give her photos she’ll want to always remember, whenever she’s ready for the photoshoot.

Next, The Doctors waned to play Guess That Celebrity Body Part again, showing a picture of a tattoo on someone’s finger that read “BAD.” Could you guess who the tattoo belonged to? Was it Demi Lovato, Miley Cyrus, or Pink? It was Miley Cyrus! The Doctors reminded everyone to think before you get a tattoo because there’s a lot of risks involved including infection if you go to the wrong place. You can always make your decision after a good night’s sleep! Sleep was the word of the day and you can use the word sleep to enter for a chance to win a Nuyu Sleep System, which warms you up and cools you down to relax you, easing you into sleep and gently waking you up.

Finally, before the show The Doctors shared three easy home remedies that could help prevent cold sores. First, avoid peas, grain cereals, and even beer, because they contain an essential building block for the herpes virus. Second, if it’s cold and windy, lips can get dry and crack, putting you at risk for a cold sore. Soothe and protect your lips with petroleum jelly. Third, use lemon balm tea applied with a cotton ball to help fight the sore. Your own ear wax is not a good home remedy.