The Doctors talked about a new website that features drunken pictures of young people without their consent. It’s called Caught Drunk and it shows all kinds of people caught in drunken acts. Founder Barry Carter defended the site and pointed out a cash prize to the pictures most shared online. He says the site is creating a fun social experience.

It’s legal because they’re in a public place, but they can request the pictures to be taken down as long as they can prove that it’s them. Dr Travis Stork pointed out that you don’t know all the details of why the person was in that position, but Dr Drew Ordon said it could be a wake-up call to not get passed-out drunk. Dr Jennifer Ashton pointed out that there is nothing cool about showing that you have lost control of your behavior. Rather than taking a pic, help the person.

What would you do if pictures of you were posted online without your permission?

The Doctors then moved on to talk about an app that lets you add cuts and bruises to your selfies to “prank friends and family.” Critics argue that the app glorifies abuse and brutality. A lawyer defended the app saying scars and bruises don’t have to “come from violence” and the app was created to “prank friends.”

The app’s description includes: “Your friends and family will be convinced that you have suffered a beating when they see a photo of you with a black eye, bruises, and cut up face.” Dr Jennifer Berman said there are some people who are sensitive to violence and they could be triggered by the pictures.

What do you think? Is that app all in good fun or taking things too far? 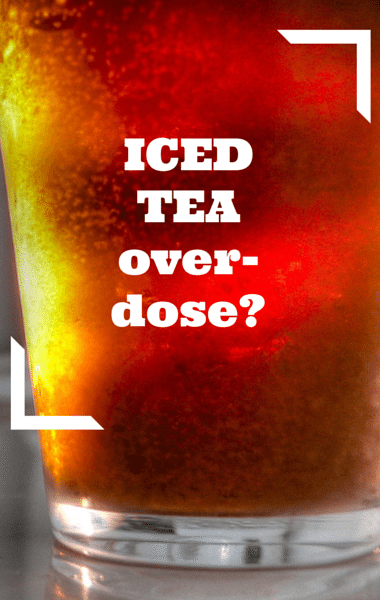 The Doctors discussed the man who got kidney stones from too much iced tea. (arriabelli / flickr)

The Doctors also shared that doctors believe that a man’s excessive consumption of iced tea, about a gallon a day, caused the kidney failure that has had him on dialysis since. The man got concerned after he got a strange taste in his mouth, fatigue, and body aches. He drove himself to the hospital and doctors found that his kidneys weren’t functioning properly. The patient admitted to drinking 16 glasses of iced tea a day.

Dr Berman explained that calcium oxalate stones are very common and oxalate can be found in black tea. She said he was probably predisposed to stones, because black tea can be healthy. Dr Stork wanted everyone to know that black tea is loaded with antioxidants and it’s even one of his go-to beverages.

The Drs: How To Avoid Kidney Stones

Dr Jennifer Ashton said you can get into trouble for drinking any other fluids as well, and this is just an extreme example. Dr Stork said if you enjoy black tea, enjoy it in moderation. Dr Berman said, “Know your stones.” Dr Ashton said it’s important that if you do pass a kidney stone, you take it in to be evaluated. She’s had three and described them as more painful than childbirth.

To avoid kidney stones, stay hydrated and minimize foods rich in oxalate. Don’t eliminate calcium. Dr Ashton said when you’re passing kidney stones, it’s important to use something that could catch it, and described it as the size of a grain of sand, although it surely packs a punch. You can try green tea instead of black tea.

The Drs: Leech In Throat

The Doctors shared the story of a Chinese schoolboy who blacked out after complaining of a sore throat. Doctors discovered a nearly three-inch long leach had been growing inside him for a month. Doctors say the 11-year-old likely became infected after accidentally drinking water contaminated with leach larvae. Each time the leach curled up, it blocked the boy’s airway, causing him to lose consciousness.

Dr Berman said leeches are often used for wound healing. Dr Stork said 75% of Americans who got on vacation to tropical areas will end up with some type of health issue because there are organisms that we’re not used to. Dr Stork asked if Dr Ashton had to choose between a leech or a kidney stone which one would she go with. She chose the kidney stone because there’s medication available for that! What would you pick?