A New York City viewer asked why he gets the rumbles while eating a meal. Is it caused by what you are currently eating, or meals eaten earlier?

Gastroenterologist Dr. Jorge Rodriguez said it’s actually both. Every time you eat, your stomach tells your intestines to clear the way. This is not unusual. 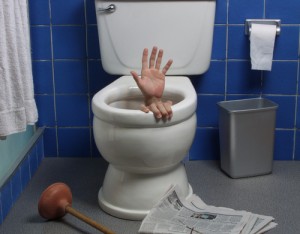 The Doctors: How To Poop Comfortably With Hemorrhoids

The Doctors said Straining Can Be Bad For Your Health. A viewer said she suffers from Hemorrhoids and wants to know how to poop more comfortably.

Dr. Jorge Rodriguez explained that Hemorrhoids are veins in the butt. Arteries take blood down, and veins bring it back up. Straining causes veins to swell, and since they don’t return the blood, they become enlarged.

Hard stool and constipation will irritate the veins. Dr. Lisa Masterson said it is a common problem during pregnancy. She said the one time it’s OK to strain is when you are delivering a baby.

Don’t try to force yourself to have a bowel movement. Dr. Jorge Rodrigez said only go to the bathroom when you feel like you have to go. Leaning forward while on the toilet will also put your bowel at a more anatomically natural angle.

Dr. Travis Stork: Is It Safe To Plunge Someone Else’s Poop?

John recently had a party and someone clogged his toilet. He wondered if it is safe to plunge someone else’s poop. Dr. Jorge Rodriguez said plunging is safe if you do it correctly. Feces is baceteria, so you want to avoid contact with your eye or mouth.

Don’t aggressively plunge, because it shouldn’t take much to fix the clog. Be sure to rinse off the plunger in the toilet afterwards. Dr. Travis Stork said you can even let it dry between the toilet seat and the toilet bowl.

The Doctors: Colonoscopies Cause Bad Gas?

A viewer recently had a Colonoscopy and has been experiencing bad gas ever since. Dr. Jorge Rodriguez said the gas is not related to the Colonoscopy, because that gas would’ve dissipated very quickly. Rather, the cause of gas is dietary.

If anything, the Colonoscopy may have changed some of the intestinal bacteria, so Probiotics may help. Dr. Travis Stork said gas can also indicate that you have a healthy diet. Read How Poop Transplants Fix Chronic Diarrhea.

If you have bad smelling stool, there is a product called Just A Drop that you can put in the toilet water before you sit down. It can help to fight the foul smelling odors associated with bowel movements. Click here to purchase Just A Drop Toilet Odor Neutralizer.