Andy and Jenny Atkins went on vacation to Honduras with their four-year-old son Logan. But during a sightseeing flight, their plane lost an engine and crashed into the ocean. Andy searched for his missing son as the pilot tried to free Jenny, who was unconscious and trapped in the plane.

Some doctors who happened to be on a nearby boat intervened to help, and the family was taken to a hospital for evaluation. Today they’re doing fine, and Jenny and Logan were in the audience.

Dr. Travis asked a question every air traveler has probably wondered about. What goes through your mind when the plane is about to crash? 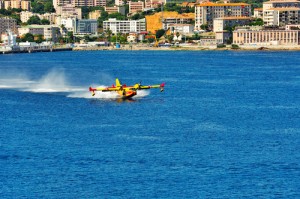 A family who survived when their plane crashed in the ocean shared their story.

“I didn’t really realize we were crashing until we were upside down under the water,” she said. Jenny got her son free, though she was unable to free herself before passing out again. Dr. Travis said that Andy swallowed a lot of water and got a severe lung infection after the accident.

Dr. Travis said this is called Aspiration Pneumonia, caused by swallowing an excess of water, and especially salt water. He said if you are in a near-drowning situation and begin to experience symptoms later on, it’s important to get this checked out because the condition won’t develop in the immediate aftermath.

How To Survive a Plane Crash on Water

The Doctors shared tips on surviving a plane crash in the water, including Staying Upwind of the aircraft. But you want to stay near the wreckage so rescuers can easily locate you.

Avoid any fuel or oil in the water, which could catch fire. Look for flotation devices, and strap them together for additional visibility. You should try to keep an eye on injured victims, getting them into rafts if possible.

The Doctors: How To Survive If You’re Stranded

Dr. Travis shared some general survival tips if you are stranded after an accident. You should try to find a clean water source, since the body can’t go more than a week without water. You also want to try to find food, though you could actually survive up to 40 days without it.

Finding a shelter from the sun and other elements can help you rest and reduce your body’s caloric usage. You want to attend to serious injuries in whatever way possible. After that, focus on attracting attention so you are able to be rescued.

Being prepared can help save a life if you find yourself in an emergency.

The Drs TV: Vitamins Vs Sleep Vs High Altitude

A woman asked The Doctors a complex series of questions, about whether supplements or sleep will help her be healthier, and whether living at a high altitude will help her “cheat death.” Dr. Travis Stork said that vitamins from food and sleeping well can help you live a healthy life.

As for her third question, Dr. Andrew Ordon said it’s true that people living at a high altitude “have a 22% lower risk of developing Coronary Artery Disease and having Heart Attacks.” Dr. Jim Sears explained that the lower oxygen levels at high altitudes seem to cause genetic changes that increase your blood vessel supply to the heart.