The Doctors met a woman named Gladys, who was born with a rare medical issue. Her fourth toe is shorter than the others, and it stopped growing around age 10. Gladys said that other people have made fun of her toes, which makes her uncomfortable enjoying beach activities and open toed shoes.

“It’s been very hard for me, because everyone walks around bare footed or with flip flops, and I’ve never been able to do that,” she said. 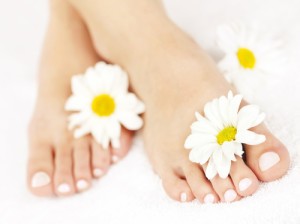 If you have a genetic defect that resulted in short toes, custom implants can correct this instantly.

Dr. Ali Sadrieh is a podiatrist, and he met with Gladys to help come up with a treatment plan. Gladys recalled the taunts of other children, and got emotional at the prospect of a medical solution. She said other doctors did not give her much hope; one doctor wanted to simply cut off her toe.

Dr. Ali explained that the toe isn’t the medical issue in Gladys’s case. “It’s the Metatarsal behind the bone” that didn’t grow, he explained. A new implant procedure can lengthen the toe and instantly provide relief for Gladys after a life of taunting and discomfort.

“I’m really hoping that I’ll be able to go to the beach and run, and not have people stare at my feet,” she said. Dr. Ali said that her toe would look better as well as giving her more footwear options.

In the operating room, Dr. Ali used a bandage to squeeze the blood out of the foot, so that there’s not a lot of blood loss during the procedure. I’ve never understood how doctors can see what’s going on inside you with all that blood in their way, so this makes sense to me.

You know what’s gross? The inside of your foot. Dr. Ali showed where Gladys’s tendon was shorter than the others. He planned to cut the tendon and lengthen it, explaining that the shortened tendon caused the anatomy around it to grow abnormally as well, in a domino effect.

Dr. Ali explained that the implant would be custom created to fit her foot perfectly. The implant is sutured using fiber wire, a permanent suture to keep the implant in place. That tendon from before also played a vital role in this procedure.

“I split it down the middle, and I reversed it, and I lengthened its length by double,” he said, adding that the skin and anatomy would adapt to the procedure over time. In the unlikely event that Gladys wanted to go back, the surgery is completely reversible.

Dr. Ali said it’s a medical myth that you can’t instantly lengthen a toe, which is what he just did. Now Gladys is happy with her more aesthetically pleasing toes. After a lifetime of taunts and self-consciousness, she has normal looking feet.

Dr. Travis explained that Psoriasis can be a stubborn and unsightly problem. He introduced a 36-year-old woman named Carrie, who suffers from Plaque Psoriasis. She said that the worst part of the condition is the emotional toll it takes, making her uncomfortable with her body and in romantic situations.

“My self-esteem has plummeted immensely,” she said. It also bleeds and itches, she said, causing problems with her wardrobe. She doesn’t even expose her legs.

Dr. Glynis Ablon met with Carrie to help her find a solution. She has been battling this for 10 years, and originally suspected it was Lice. But over the counter treatments for Lice made her Psoriasis worse. It spread through her body, and doctors diagnosed her with Eczema.

Carrie finally got a proper diagnosis of Psoriasis, and she explained that the disease makes her want to hide from the world, and she’s not interested in dating. Dr. Ablon said there are a variety of treatments to help her get her condition under control.

Carrie complained about her scalp and ears, which were inflamed with Psoriasis. Dr. Ablon said that Psoriasis is not contagious, and is common, affecting 2% of the population. She added that advancements in treatment have made a huge difference for patients like Carrie, who was still very emotional during her examination.

She has tried topical steroid creams and Vitamin D, as well as tar shampoos to fight her condition. “But it just didn’t take it away,” Carrie said. Dr. Ablon recommended a Vitamin A topical treatment as well.

Dr. Ablon said that another option is Photo Therapy, which is not recommended Carrie’s light complexion and eyes put her at risk for skin cancer. However, LED therapy is a painless option that supplements topical treatment.

Cytokines are partly to blame for Psoriasis symptoms, and LED treatment is effective in fighting them. Dr. Ablon hoped it would reduce Carrie’s inflammation and lesions.

Carrie was allowed to relax and nap during the 20-minute treatment. Dr. Travis said this therapy should help with Carrie’s symptoms.

Read more about Cytokines & Your Health.