The Doctors did another Health Scare Experiment, this time to illustrate the devastating effects of texting & driving, and other situations involving distracted driving. Melody reported her husband Justin to the team because she was concerned about his driving habits. The Doctors worked with the California Highway Patrol and medical personnel to simulate an accident scene.

Since Justin doesn’t wear a seatbelt, his injuries would have been severe. The highway patrol officers talked with Melody at their accident scene, indicating that the passengers in the other vehicle did not survive the mock accident. 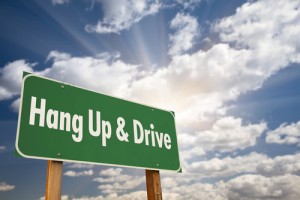 In the studio audience, Melody and Justin watched the video of their accident simulation. It seemed like Melody was taking all this much harder than Justin, but maybe he’ll turn out to be more affected by it.

The next stage of the simulation was a trip to the ER at UCLA Medical Center. Dr Mark Morocco was on hand as part of the health scare experiment. Did you know that about 35,000 people are killed in car accidents every year? According to the show’s statistics, 50% of those fatalities weren’t wearing seatbelts.

The ER staff swarmed Justin to evaluate his injuries and create a sense of what the activity is like in a busy ER. Dr Morocco said they were concerned about potential spinal injuries. Meanwhile, Melody arrived at the hospital to talk with Dr Morocco.

By his hospital bedside, Dr Morocco said that Justin’s spine was fake injured in the fake accident, suggesting that he would likely lose the use of his legs for the rest of his life.

Also in the studio audience were the EMTs and CHP officers who participated in the simulation. Dr Travis Stork said that, though this was a simulation, it seems real and is too often a fact of life. He asked an EMT about arriving at accident scenes where cell phone use was a factor.

“Often we show up to car accidents and a lot of times cell phones still in people’s hands,” Bobby Beall said.

Officer Saul Gomez said the CHP issued 168,000 citations in 2011 for Distracted Driving with cell phones. Dr Travis said that citing drivers is intended to be a potentially life-saving warning to prevent accident.

You are 23 times more likely to have an accident if you are texting while driving, according to statistics. “If you’re not paying attention, it doesn’t matter how good a driver you are,” Dr Jim Sears said.