Do you think of yourself as lazy? Probably not many people do, but judging by the stock footage of overweight folks trundling around, shot from the neck down, The Doctors think America has a laziness problem.

Laziness can actually make you sick, they claim, increasing your risk for a variety of health problems, including Diabetes, Dementia, Stroke, Kidney Problems, Liver Failure, Heart Attack, and of course Obesity.

That’s food for thought the next time you take the elevator or circle around looking for the closest parking spot to a store. 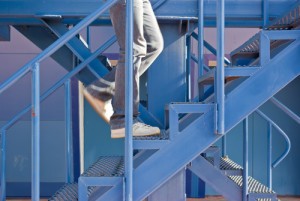 The new fitness hobby of Skyscraper Running burns three times as many calories as walking, and is easier on your knees than traditional running.

The Drs TV: Laziness Vs Lethargy

Dr. Travis Stork said Laziness could have a serious impact on health. But there is a medical condition known as Lethargy, in which patients actually never have energy.

“You always have to rule out a medical cause before you just say, ‘I’m being lazy,’” he said.

Lethargy can be caused by medication side effects, Depression, or Anemia. Drug or Alcohol use, or even chronic conditions like Cancer and Diabetes can present as Lethargy.

The Doctors said you can rule out medical causes if you think you are lazy.

How Laziness Affects Your Health

Do you spend a lot of time on your couch? The Doctors explained how this can affect your health over time.

When it comes to digestion, you are probably eating junk food as well, they said. This can include sodium, sugar, and fat. Sitting around all day slows down your digestion processes, potentially leading to constipation.

Heart Disease is America’s #1 killer, and the more you sit, the higher your Heart Attack risk becomes. Lazing around can also cause Muscle Atrophy, and you will begin to store more Belly Fat.

Eating too much Sugar as you snack and play games or watch TV can also lead to Diabetes. Dr. Travis said it’s all too easy for your Couch Potato habits to lead to serious health issues.

“Only about 16% of Americans over the age of 15 are actually participating in sports or exercise activities,” Dr. Lisa Masterson said. “We have to get moving.”

Dr. Jim Sears said that five times as many people watch TV on a given day than play sports. Dr. Andrew Ordon said that leads to over 100,000 deaths annually that are related to Obesity.

“Occasionally we’re entitled to a lazy day,” Dr. Andrew said, but making it a chronic lifestyle can be dangerous.

Dr. Travis added that relaxing on the couch and watching TV could be an incentive or reward after you exercise.

It’s a new workout phenomenon that probably doesn’t cost very much. Skyscraper Running has thousands of people running up the stairs in tall buildings near them. Could you dash up 86 flights of stairs?

Dr. Jim said that’s a good way to exercise when you’re traveling, though it can be exhausting. Dr. Travis said you burn three times as many calories going up stairs than simply walking.

Dr. Jim added that one Skyscraper Running enthusiast embraced this activity after injuring his knee doing traditional running. Going up stairs is easier on the knees.

Once they get to the top, Skyscraper Runners take the elevator down, to avoid putting excess pressure on the knees.