It’s common for a woman’s shoe size to go up during pregnancy, but what about after pregnancy? The Doctors helped a viewer figure out why her son is four-years-old, but her feet are still larger than they were before. She also wanted to know if she had a second baby, would her feet grow even more?

Podiatrist Dr. Rondrick Williams joined The Doctors’ panel to explain this phenomenon. During pregnancy, a woman’s body carries extra weight. Because of this increased weight, the arch flattens and the foot lengthens. According to a study done by the University of Iowa, 60-70% of 49 pregnant women had an increased shoe size.

Similarly, Dr. Lisa Masterson’s feet also grew during her pregnancy, and they stayed that way. Dr. Williams said that the biggest changes occur in the first pregnancy. With second or third pregnancies, women’s feet should pretty much stay the same. 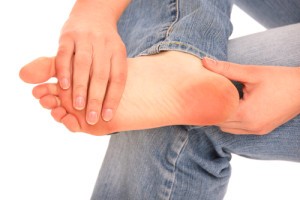 The Doctors: Plantar Wart Cause

The Doctors then revealed a gross picture that made their audience members cringe. The image was a plantar wart located on the bottom of the foot. Plantar warts are caused by HPV and are not just painful, but highly contagious.

The Drs: Callus vs. Wart

A plantar wart often looks like a callus with thickened, hardened skin. However, the key difference between a callus and a wart are the black “pinpoint areas” that indicate vascular involvement. A callus will have these characteristics.

Plantar warts are difficult to get rid of, but can be treated with topical agents. If you have a plantar wart on your foot, it’s important that you never allow others to come into contact with it. Plantar warts are another great excuse to wear flip flops in the gym shower!