There are allergies that can stop you dead in five minutes or less, and one little girl and her mom have to deal with this reality every day. The Doctors also previewed the new TLC series Cracking Addiction.

When Kylie Kozar was seven, she had an anaphylactic reaction to peanuts after visiting a restaurant. Her parents explained to the waiter that all their food needed to be made without nuts, and Kylie took a bite of her dads beans and immediately suffered a tingling tongue and swelling throat.

Apparently, the chef had been experimenting with new recipes and put peanuts in the sauce. Her mom got out her EpiPen and instructed the restaurant manager to call 911. 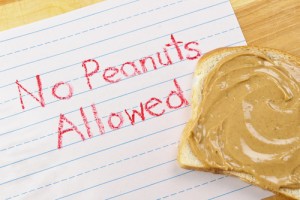 Peanuts may seem innocent, but for people with anaphylactic peanut allergies, they can be deadly.

Kylie and her mom Yael appeared on The Doctors to discuss her life-threatening allergy.  Kylie said that anaphylaxis feels like you’re being strangled and going to die.

Yael said that she laughs when she sees the phrase “food allergy,” and said that parents, doctors and allergists need to call it what it is and say “severe or life-threatening anaphylactic allergy” or else servers and teachers are not going to get it.

Up to 15 million people are affected by these deadly food allergies. It can be scary for parents who have no idea if their child is allergic to something or not. Dr. Cathy Green said there is a new molecular allergy blood test to test for different types of peanut allergies.

The Doctors: EpiPens Save Lives – How To Use?

Dr. Travis Stork said that anaphylactic shock can happen from foods, medications or insect/bee stings. It can happen in minutes and involves swelling of the mouth and throat, called angioedema. Your blood vessels can dilate, giving you a systemic drop in blood pressure.

Within 10 minutes, if proper treatment is not given you could die. EpiPens can stave off circulatory collapse. Dr. Stork said that EpiPens are very easy to use, and all you have to do is read the directions on it.

A new show on TLC called Cracking Addiction explores the dangerous realities of life on drugs. Brandon Krauss has dealt with his own addiction and interventions, and now that he’s clean, he and his mother Debbie are staging interventions for other drug addicts.

Brandon said that when he looks back, he can’t believe the person that he was and had no control of his emotions. He thinks he can bring a lot to addicts because he’s been through what they have.

Brandon and his mom have appeared on The Doctors before, when they performed an intervention on heroin addict Nicole. After relapsing once, Nicole is back on track and doing well. Nicole called in to The Doctors and Dr. Stork said she sounded fabulous. You can catch Cracking Addiction October 3 at 9 p.m. on TLC.

Dr. Stork sent everyone in the audience home with an Eton emergency radio to help prepare people for natural disasters. The radio also features a USB cord for charging your cell phone.