Caroline is 22 years old, and she is legally blind without wearing contacts or glasses. She has struggled with deteriorating vision since age 6, and wears Hard Contacts to help stabilize her vision.

To correct her vision, hopefully to a perfect 20/20, doctors wanted to use a Laser Implantable Contact Lens, which would also cure her Astigmatism. Doctors demonstrated the lens they planned to implant through a tiny incision, using a plunger to inject the lens into place. 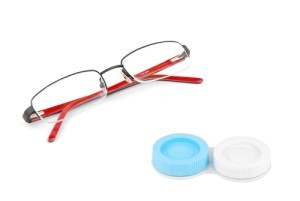 Would you like to trade your glasses or contacts in for perfect vision through surgery?

Eye surgery seems very risky, but her doctor said it went perfectly, adding that the implants should last 30-40 years without causing any discomfort or problems. It’s been about a week since her surgery, and she compared her vision to “seeing in HD,” describing an audience member’s eye color from 40 feet away.

Caroline said her vision is crisp and clear after surgery, as opposed to before when she was completely blind without the aid of her glasses or contacts.

Dr. Robert Maloney used a model to explain how the surgery works. The tiny lens implant is smaller than a fingernail, and is inserted behind the colored part of the eye, making it invisible and eliminating the need for maintenance associated with typical contacts.

A more conservative approach would be the common Lasik surgery that has become so popular in recent years. But since Caroline had an extreme vision deficit, she was a good candidate for this more radical approach.

The Doctors: Blurry Vision Surgery Before & After

The Doctors showed an example to approximate Caroline’s blurred vision before her procedure. They used a photograph of a group of people, and it was so blurry that you could only really tell that people were all wearing white T-shirts.

In the after picture, the diverse makeup of people in the photograph was fully revealed in detail. Dr. Maloney said that after her procedure, Caroline probably sees better than the average person.

If you have vision problems, would you want to undergo a procedure like this, or do you think it’s too risky? Good vision is so important, so how do you weigh the benefits against the risks?