Almost everyone has a scar somewhere on their body. They are a common part of life. But for some people, scars can be a much more serious problem.

Dr. Andrew Ordon met a man named Tracey, performing a consultation via Skype. Tracey is 32, and he has a giant Keloid growing on his ear. He seems pretty calm and well adjusted for someone who probably gets a lot of stares from strangers. 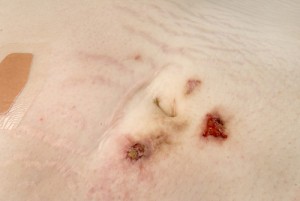 Sometimes, scar tissue can have a mind of its own and develop into growths called Keloids.

Tracey explained that he got his left ear pierced at age 18. A few years later, he removed the earring. Afterwards, he noticed a bump on his left ear, which was removed by a surgeon and followed by a radiation treatment.

Three years later, the bump grew back, and it was removed again by a different surgeon, though no follow up treatments were administered that time. Now it has grown back and is presumably worse than ever, creating a prominent growth on his left ear.

Dr. Andrew called it “scar tissue gone wild,” explaining that it was meant to stay in one area, but instead has grown outwardly. Tracey confirmed that his condition does get lots of attention from friends as well as strangers.

Dr. Andrew said that he thought the prior treatments were viable options, but with this type of aggressive Keloid, he suggested a more proactive treatment. According to The Doctors, Keloid surgery only has a 50% success rate, so it’s really a gamble in most cases.

He recommended steroid injections, followed by surgery and radiation. Dr. Andrew also suggested a compression therapy option. He said that there is some silicone sheeting that could help in the treatment process.

Lastly, he suggested topical medications that have been shown to help prevent the scar tissue from growing back again. I guess they just wanted to show this man’s shocking Keloid on TV, because all Dr. Andrew had to offer was advice.

Usually you at least get a free surgery out of your appearance on The Doctors, but I guess not everyone is so lucky. Hopefully Tracey can find the medical assistance he needs from medical professionals in his area.